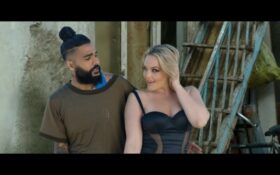 In Iran, where the government retains tight controls over traditional media like newspapers and television, authorities have used courts to patrol social media platforms beyond their reach. Hours before the video went live late Wednesday, Iranian security forces detained two popular music arrangers who worked on the song in the southern city of Shiraz and raided their studio, said Sasy’s manager, Farshid Rafe Rafahi, the CEO of Los Angeles-based EMH Productions. The brothers, Mohsen and Behrouz Manouchehri, now face prosecution by a criminal court in Tehran, he added.

The Fars news agency, believed to be close to Iran’s paramilitary Revolutionary Guard, also accused the music producers in Iran of running gambling websites at Sasy’s behest. Rafahi said the gambling accusations stemmed from a misunderstanding, given that a poker website helped sponsor the music video.

Sasy is now a permanent resident of the U.S. and has lived in exile since leaving his career as a successful underground rapper in Iran in 2009. Since the video came out, Iran has promised to “pursue his case with international legal authorities,” according to the Fars report.

While hard-liners consider the song a Western assault on Islamic teachings, thousands in the country are of a different mind. In thrall to the catchy beat, scores of hip teenagers and twenty-somethings posted videos on social media lip-syncing, dancing and striking poses to “Tehran Tokyo” in their living rooms, kitchens and workplaces. In the clips, many women wear bright lipstick and few cover their hair with the hijab.

Iranian semi-official news agencies reported that those who “cooperated with Sasy” would would face “decisive judicial action.” It remains uncertain whether police also detained any of the lip-syncing fans.

Since the 1979 Islamic Revolution installed the clerically overseen system that endures today, the Revolutionary Guard has extended its reach into most aspects of Iranian society, with laws banning women from dancing in public or appearing outside without the hijab. Authorities have cracked down on music in the past, for instance arresting young Iranians who appeared in videos dancing to Pharrell Williams’ hit song “Happy” in 2014.

Under pressure from hard-liners, the Iranian government long has blocked access to various websites and social media platforms, from YouTube and Facebook to Twitter and Telegram. Young Iranians still manage workarounds, accessing social media to share Sasy’s outlawed songs through VPNs and proxies.