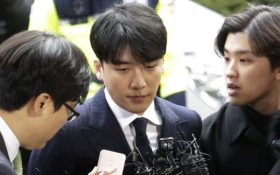 A K-pop star charged with violating South Korea’s anti-prostitution law may have to join the country’s army and face trial in a military court.

The state-run Military Manpower Administration said Tuesday it sent Seungri documents asking him to report for 21 months of mandatory military service, a requirement for all able-bodied men in South Korea, because prosecutors had ended their investigation of him.

It said in a statement that it was concerned a protracted trial in civilian courts would hamper its effort to equally apply the military obligation on Seungri, 29.

It said Seungri’s case will be handed over to a military court if he joins the military.

Men eligible for military service in South Korea are allowed to delay their conscription five times under certain conditions before they become 31, but the accumulated delayed time cannot exceed two years.

South Korean media said Seungri is expected to enter the military in late February or early March. Yonhap news agency said it’s unlikely that the draft agency will accept another request by him to postpone his conscription over future trials in civilian courts.

Prosecutors gave no details about the charges. South Korean media reported that Seungri was accused of buying prostitutes for himself and business investors from Taiwan, Japan and Hong Kong, engaging in illegal gambling overseas, and failing to report to South Korean authorities about money he borrowed abroad to use in gambling. Seungri has previously denied most of the allegations.

Big Bang has been one of the most successful K-pop bands since its debut in 2006, attracting huge, loyal followings in Asia and around the world. Forbes magazine reported in 2016 that it took home $44 million in pretax earnings the previous year. Big Bang has been on a temporary hiatus as other members served in the military.

Seungri’s case is one of several scandals that have roiled South Korea’s entertainment industry in recent years. In November, singer-songwriter Jung Joon-young received a six-year prison term, and former boy band member Choi Jong-hoon a five-year term, after they were found guilty of illicit sexual relations with a woman who was unable to resist.