Pompeo: "Significant progress" made with North Korea - The Horn News 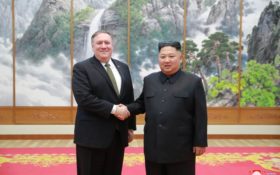 U.S. Secretary of State Mike Pompeo said Monday that he and North Korean leader Kim Jong Un made “significant progress” toward an agreement for the North to give up its nuclear weapons.

Over the weekend, Kim and Pompeo held a productive meeting where they apparently discussed a second summit between Kim and President Donald Trump.

Without getting into specifics, Pompeo also said that Kim had agreed to allow international inspectors at one of North Korea’s main nuclear facilities into the country’s nuclear a missile sites — a big move towards denuclearization.

“It’s a long process,” Pompeo told reporters in the South Korean capital of Seoul where he traveled after meeting with Kim in Pyongyang on Sunday. “We made significant progress. We’ll continue to make significant progress and we are further along in making that progress than any administration in an awfully long time.”

Trump, tweeting from Washington shortly after Pompeo left North Korea, cited progress Pompeo had made on agreements he and Kim came to at their June meeting in Singapore and said, “I look forward to seeing Chairman Kim again, in the near future.′

Pompeo said he and Kim had gotten “pretty close” to fixing the logistics for the summit but stressed that “sometimes that last inch is hard to close.”

North Korea’s state-run news agency KCNA, meanwhile, said Monday that Kim had “expressed his will and conviction that a great progress would surely be made in solving the issues of utmost concern of the world and in attaining the goal set forth at the last talks with the projected second DPRK-U.S. summit talks as an occasion.” DPRK is the acronym for the country’s official name: Democratic People’s Republic of Korea.

In an early Monday dispatch, KCNA called the talks “productive and wonderful” and said that “mutual stands were fully understood and opinions exchanged.”

In Seoul, Pompeo said Kim is expected soon to name deputy foreign minister Choe Son Hui as a counterpart for his new special envoy for North Korea, former Ford executive Stephen Biegun, who accompanied him on the trip. He and Biegun both said they expected meetings at the working level to begin soon and become quite frequent before the next summit.

“We are starting to see a first wave of actions we can take on all four pillars of the Singapore communique,” said Biegun, who will serve as Pompeo’s pointman in negotiations with the North as well as work with South Korea, Japan, China, Russia, and other countries that have an interest in the talks.

In Pyongyang on Sunday, Pompeo and Kim met for about 3 1/2 hours, first in a business session and then in a 90-minute luncheon that the North Korean leader hosted at a state guesthouse, according to the pool report from the lone U.S. journalist allowed to accompany Pompeo on his Asia trip.

“It’s a very nice day that promises a good future for both countries,” Kim told Pompeo through an interpreter as they sat down for the meal.

“Yeah, so we had a great, great visit this morning,” Pompeo replied.

Since the denuclearization effort got underway, North Korea so far has suspended nuclear and missile tests, freed three American prisoners and dismantled parts of a missile engine facility and tunnel entrances at a nuclear test site.

On Monday, South Korean President Moon Jae-in said he expects Kim to travel to Russia and for Chinese President Xi Jinping to visit North Korea soon amid a global diplomatic push to resolve the nuclear crisis. Moon also said there was a possibility of Kim holding a summit with Japanese Prime Minister Shinzo Abe.

Moon said a second Trump-Kim summit could be accompanied by major diplomatic developments that could contribute to the denuclearization of the Korean Peninsula and stabilizing peace.