[Poll] Trump to take on the NRA? - The Horn News 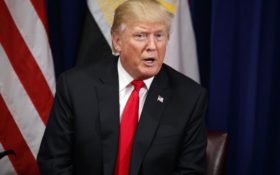 President Donald Trump is calling for quick and substantial changes to the nation’s gun laws — and longtime ally, the National Rifle Association, may not be happy.

Trump held televised, bipartisan meeting with lawmakers at the White House that stretched for an hour Wednesday. Giving hope to Democrats, he said he favored a “comprehensive” approach to addressing violence such as February’s shooting at a Florida high school, although he offered no specific details.

Instead, Trump again voiced support for expanded background checks. He endorsed increased school security and more mental health resources, and he reaffirmed his support for raising the age to 21 for purchasing some firearms. Trump mentioned arming teachers, and said his administration, not Congress, would ban “bump-stock” devices that enable guns to fire like automatic weapons with an executive order.

“We can’t wait and play games and nothing gets done,” Trump said as he opened the session with 17 House and Senate lawmakers. “We want to stop the problems.”

Trump later reiterated his unwavering support of the second amendment —

Many ideas, some good & some not so good, emerged from our bipartisan meeting on school safety yesterday at the White House. Background Checks a big part of conversation. Gun free zones are proven targets of killers. After many years, a Bill should emerge. Respect 2nd Amendment!

The televised discussion allowed Trump to play the role of potential dealmaker. Democratic lawmakers made a point of appealing to the president to use his political power to persuade the NRA to take action.

Trump’s call for stronger background checks, which are popular among Americans, has been resisted by the NRA. Republicans are leaning toward modest legislation designed to improve the background check system.

“Hey, I’m the biggest fan of the Second Amendment,” Trump said, adding that he told NRA officials it’s time to act. “We have to stop this nonsense.”

The White House is expected to reveal more on the president’s plans for school safety this week. That announcement will likely include goals for background checks and bump stocks, though whether age restrictions will be specifically addressed remains unclear.

In this complicated situation, we want to hear from you — who do YOU support?

What do you support?