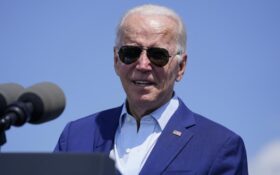 The Democrats outperformed expectations in last month’s midterm elections… but President Joe Biden is seeing hardly any change at all to his public image.

A new poll from The Associated Press-NORC Center for Public Affairs Research finds 43% of U.S. adults say they approve of the way Biden is handling his job as president, while 55% disapprove. That’s similar to October, just weeks before the Nov. 8 elections that most Americans considered pivotal for the country’s future.

Fresh off his party’s better-than-anticipated performance in the midterm elections, Biden is still facing constant, critical assessments of his leadership and the national economy.

Biden fares even worse — 42.1 percent — in FiveThirtyEight’s poll average, as of Dec. 8.

In other words, Biden’s approval ratings aren’t tracking the election results for down-ballot Democrats. In one exit poll, voters who “somewhat disapproved” of Biden broke for the Democrats by four points.

In the AP-NORC poll, only about a quarter of U.S. adults say the nation is headed in the right direction or the economy is in good condition. Both measures have been largely negative over the course of the year as inflation tightened its grip… and were more positive through much of Biden’s first year in office.

The Biden administration in its second year in the White House relished economic growth, a series of legislative wins and relative success for the president’s party in the midterms. But that has yet to translate to glowing reviews from a pessimistic public.

Even as Republicans took control of the House, Democrats defied historical precedent to stunt GOP gains and even improve their Senate majority, which was cemented with this week’s runoff win for Sen. Raphael Warnock, the lone Democrat in Georgia this year to be elected statewide.

The poll shows majorities of Democrats and Republicans alike think things in the country are on the wrong track, likely for different reasons.

Democrats have slightly renewed their faith in Biden, boosting his overall job approval rating from a summer slump. Even so, the 43% who approve in the new survey remains somewhat depressed from 48% a year ago and much lower than 60% nearly two years ago, a month after he took office.

Seventy-seven percent of Democrats, but only 10% of Republicans, approve of Biden.

While many Americans don’t entirely blame Biden for high inflation, AP-NORC polling this year showed Biden consistently hit for his handling of the economy.

As in recent months, the new poll shows only a quarter of U.S. adults say economic conditions are good, while three-quarters call them bad. Nine in 10 Republicans, along with about 6 in 10 Democrats, say the economy is in bad shape despite low unemployment. Despite low prices for gas, ratings of the economy have soured due to high prices for other goods, like foodstuffs.