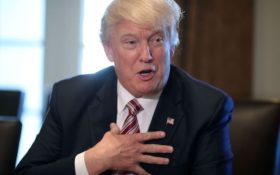 Studies have shown that 90% of every mainstream media story covering Trump is negative.

Despite this record-setting two-year media blitz, Trump’s approval rating among voters has gradually ticked up. In March, The Horn News reported that the president’s approval was higher than former President Barack Obama’s approval during the same time period in their presidencies.

This month, even Trump’s most loyal backers were surprised by the news of his latest approval ratings.

In June, Trump surpassed even one of the most beloved president’s in United States history — former President Ronald Reagan — in overall approval. That’s according to a new Fox News poll, which reported that Trump’s June approval rating was 45%.

In June 1982 of Reagan’s second year in office, his approval rating 44% — a tick below Trump’s latest numbers.

The stunning poll has Trump’s harshest critics stunned. Left-leaning “fact check” website Politifact was asked to debunk the poll numbers by readers — but despite their best efforts, they couldn’t spin the news and admitted the pro-Trump story was true.

Supporters will agree that Reagan is admirable company for the president to keep.

And at this rate, it looks like another six years of Trump in the White House.

Think the mainstream media can survive that long?