Poll shocker! Trump will be furious about this - The Horn News 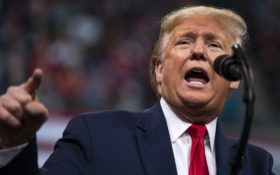 President Donald Trump has finally teased a major announcement on Thursday after weeks of inactivity in his fledgling 2024 presidential campaign.

“AMERICA NEEDS A SUPERHERO!” Trump wrote Wednesday on his TruthSocial app. “I will be making a MAJOR ANNOUNCEMENT tomorrow. Thank you!”

Could it already be too late?

And it’s not particularly close.

According to a Suffolk/USA Today poll —

By 2-1, GOP and GOP-leaning voters now say they want Trump’s policies but a different standard-bearer to carry them. While 31% want the former president to run, 61% prefer some other Republican nominee who would continue the policies Trump has pursued.

They have a name in mind: Two-thirds of Republicans and those inclined to vote Republican want Florida Gov. Ron DeSantis to run for president. By double digits, 56% to 33%, they prefer DeSantis over Trump.

DeSantis dominates voters who say they’re only somewhat conservative, 59 percent to 29 percent, and dominates moderates by even more.

But don’t count Trump out quite yet.

Voters that identify themselves as very conservative still back Trump, 54 percent to 38 percent. Very conservative voters tend to dominate the primary process, so it’s far from over for Trump’s campaign.

“It is going to be a competitive primary,” Republican pollster and Trump super PAC insider Tony Fabrizio said about the survery he conducted for the Journal. “The two favorites right now would be Trump and DeSantis.”