Poll shocker! This RINO is in deep trouble... - The Horn News 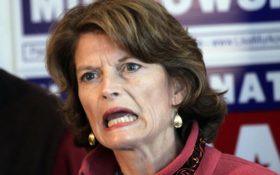 For decades, the political game inside the Republican Party has been the same: Campaign as a conservative, then govern as a liberal.

But new polls show Republican voters in at least one state are sick of it—and they may just bring an end to one of the biggest RINOs (Republican In Name Only) of the U.S. Senate.

Alaska’s Lisa Murkowski comes from one of the most powerful political families in the GOP. She became a senator when she was appointed to the seat in 2005—by her father, then-Governor Frank Murkowski, who appointed his daughter to finish out his own term.

The two Murkowskis have held “their” U.S. Senate seat for a combined total of 41 years.

The nepotism is bad enough, but the state’s conservative Republican base has been increasingly outraged over Murkowski’s anti-conservative, anti-Trump voting record.

Murkowski is a big-spending social liberal who has voted to impeach Donald Trump and opposed the last two conservative Supreme Court justices.

Murkowski has only a 31% voting record from Conservative Review. She supported the Bush administration’s bailout for Wall Street and Big Business and calls herself “pro-choice” on abortion.

Murkowski long been a fan of expanding visas for foreigners to take American jobs.

She voted to impeach Donald Trump even after he was no longer president, claiming that he incited the riot at the Capitol on January 6.

Her stance was so outrageous that the state Republican Party censured Murkowski in March for her vote to impeach the ex-president.

The Cyngal poll finds 78% of Alaskans said her impeachment votes made them way less likely to vote for her in 2022.

She said the circus-like claims of sexual harassment gave “the appearance of impropriety.”

In “my conscience, I could not conclude that he is the right person for the court at this time,” she said, even though “it does appear that Judge Kavanaugh will be seated on the Supreme Court, without my vote.”

But Kavanaugh had the last laugh: He was confirmed to the bench, anyway, and Murkowski ended up even further at odds with her own state’s voters.

After the Kavanaugh fiasco, Murkowski’s old rival, Sarah Palin, tweeted, “Hey @LisaMurkowski — I can see 2022 from my house…”

Palin said she wasn’t sure if she’d ever run for office again, but Alaskan voters “will never forget. What she did was unacceptable – really unacceptable.”

A new poll shows Tshibaka crushing Murkowski, getting almost twice as many votes as the incumbent.

33% of Alaskan voters support Tshibaka, compared to 18.8% for Murkowski.

Murkowski actually comes in third, behind Tshibaka and “undecided,” according to the poll from Cyngal GOP.

Murkowski is actually tied with an “independent” candidate, former Democrat Al Gross, who got 18% support in the state’s all-party primary.

On the other hand, 61% of Republicans see Tshibaka—who’s running as a conservative and a breath of fresh air—positively.

One thing is sure: Tshibaka will have at least one prominent supporter: President Donald Trump.

Trump and Murkowski butted heads all four years he was in office. In March, Trump said that Murkowski “represents her state badly and her country even worse.”

“I do not know where other people will be” in 2022, “but I know where I will be – in Alaska campaigning against a disloyal and very bad Senator.”

But don’t count Murkowski out yet: She still has the support of the GOP party machinery.

Despite her liberal voting record, the National Republican Senatorial Committee has pledged to support her during the primary.

And it’s not the first time Murkowski has come back from political death. In 2010, she actually lost the Republican primary to Tea Party challenger Joe Miller—but then ran as an independent and won in a controversial, write-in ballot campaign.

The GOP establishment supported her then, too.

Alaska is ground zero for people who put the Constitution and America First, and want to take back their party.