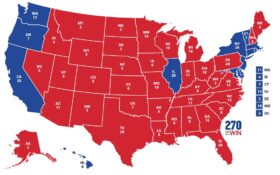 President Donald Trump received some good news from pollsters this week as the latest numbers rolled in.

And they’re better than his campaign could’ve imagined.

These polls show Trump well ahead of former Vice President Joe Biden in the key “swing” states that are expected to determine who wins the 2020 presidential election.

He’s not just ahead in these states — he’s winning by a landslide.

The survey of 15 “battleground” states shows him with a healthy seven-point advantage over his Democratic rival.

Now, he’s in position to win even more as the new poll finds that voters across those states prefer Trump by a 52-45 percent margin.

Interestingly, the poll finds that Trump has a higher negative rating than Biden, at 55 percent compared to 46 percent.

They also believe the former vice president would be better at handling the ongoing coronavirus pandemic, 51 percent to 45 percent.

But there’s one place where Trump holds the edge – and it’s the one that will matter most, especially later this year: Who can best rebuild an economy that’s in shambles after two months of quarantines and shutdowns due to the pandemic.

Americans across the swing states seem to agree that the core issue for the upcoming election will be restoring the nation to fiscal health.

And that’s where Trump has his edge.

Given that Trump has spent his life in business while Biden’s spent his in Washington, that would seem to make sense.

The poll is the latest in a series of reports that show the numbers slowly swinging in the president’s favor. One poll this week of the key swing state of Ohio finds Trump has a three-point edge over Biden in the state.

How key is it?

No Republican has ever won the White House without winning Ohio.

Even Abraham Lincoln won with the Buckeye State in his corner.

Democrats have also claimed they have a chance in Texas, a key red “prize” with 38 electoral votes.

But a poll from Emerson finds they’re facing long odds in the Lone Star State, with Trump up by six percent.

And in what may be the most encouraging sign for the president yet, a poll from The Hill finds his approval rating is now above water, reaching 51 percent this week.

Trump’s overall average at the moment isn’t too far off that mark. According to RealClearPolitics he’s at 45.6 percent.

Republicans also got more news this week that bodes well for their chances in November – one that has many believing that not only will Trump retain the White House, but that the GOP could reclaim the House of Representatives.

It was the first time in more than 20 years that a Republican candidate flipped a Democratic House seat in California.

Even a “blue” state like California is starting to turn a little red.