Poll shocker! Many rate Biden too soft on Putin - The Horn News 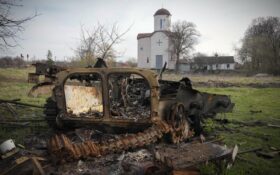 Many Americans still question whether President Joe Biden is showing enough strength in response to Russia’s war against Ukraine, even as most approve of steps the U.S. is already taking and few want U.S. troops to get involved in the conflict.

A poll by The Associated Press-NORC Center for Public Affairs Research shows 54% of Americans think Biden has been “not tough enough” in his response to Russia’s invasion of Ukraine. Thirty-six percent think his approach has been about right, while 8% say he’s been too tough.

The results underscore the conundrum for the White House. As images of Russian attacks on civilians and hospitals are shared around the world, there’s pressure to stop Russian President Vladimir Putin and help millions of Ukrainians under attack in their home country or fleeing for safety. But Biden must also manage the threat of escalation with Putin, who has raised the alert level on using Russia’s nuclear weapons, and prevent the U.S. from getting involved in a much larger conflict.

“Given the potential desperation of President Putin and the Russian leadership, given the setbacks that they’ve faced so far militarily, none of us can take lightly the threat posed by a potential resort to tactical nuclear weapons or low-yield nuclear weapons,” CIA Director William Burns said in a recent speech at the Georgia Institute of Technology.

Burns added that “so far we haven’t seen a lot of practical evidence” of Russian nuclear escalation.

The White House has authorized more than $2 billion in weapons and led Western sanctions that have crushed the Russian economy. Biden has ruled out sending U.S. troops — a decision supported by a majority of Americans.

The U.S. has also held back some weapons and defensive systems sought by Ukraine and placed early limits on intelligence sharing that have been loosened throughout the conflict.

The poll and follow-up interviews with respondents indicate many Americans, responding to images of Ukrainians being killed and Russian forces allegedly committing war crimes, want to see more action to stop Putin. A majority — 57% — say they believe Putin has directed his troops to commit war crimes. Just 6% say he has not, while 36% say they aren’t sure.

“I know that we’re not directly responsible,” said Rachel Renfro, a 35-year-old from Nashville, Tennessee. “But we’ve always been the kind of people that insert ourselves into these kinds of situations and I don’t understand why we’re not doing that now to a bigger degree.”

Renfro wants to see the U.S. accept more refugees and provide more aid to Ukraine. Sending troops should be “an absolute last resort,” she said.

Most Americans are in favor of the U.S. sanctioning Russia for the invasion, providing weapons to Ukraine and accepting refugees from Ukraine into the U.S. More Americans also support than oppose deploying U.S. troops to Eastern Europe to support U.S. NATO allies in response to Russia’s invasion, and about two-thirds say NATO membership is good for the U.S.

“In a perfect world, I wish we can go out there with the troops,” said Gonzalez, whose father served in the Cuban military and whose stepfather worked as a private contractor during the U.S. war in Afghanistan. “I feel like we shouldn’t be policing the world and going everywhere. I wish we could help them, but we’ve been fighting for a while.”

Biden faces other significant political challenges heading into the midterms with inflation at a four-decade high and soaring energy prices exacerbated by the war. The poll suggests the balance in the tradeoff between sanctions on Russia and the U.S. economy might be shifting. By a narrow margin, Americans say the nation’s bigger priority is sanctioning Russia as effectively as possible over limiting damage to the U.S. economy, 51% to 45%. Last month, more said they prioritized sanctioning Russia over limiting damage to the economy, 55% to 42%.

Anthony Cordesman, emeritus chair in strategy at the Washington-based Center for Strategic and International Studies, noted that Americans broadly support many actions the White House is already taking. Building up Ukraine’s air defense or sending more tanks and airplanes also requires setting up logistics, including radar and maintenance capabilities, that take far longer than many people would expect, Cordesman said.

The White House making that case to people who want more action carries its own risk.

“If you start communicating the limits to what we can do in detail, you may or may not reassure the American people, but you’re providing Russia with a lot of information that you scarcely want to communicate,” Cordesman said.