Poll SHOCKER! Americans are FED UP with Dems - The Horn News 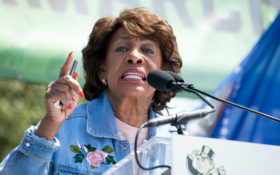 Tired of hearing about special counsel Robert Mueller and the Russia investigation? You’re not the only one.

The latest CBS poll shows that 53 percent of Americans are fed up with congressional Democrats, and are demanding Reps. Maxine Waters and Nancy Pelosi drop the Russia investigation and focus on the real issues concerning Americans.

Sen. John Kennedy, R-L.A., usually a more reserved lawmaker, tore into Congress and told the truth about the Democrats’ dysfunction on Thursday.

“We’ve have done nothing. Zero. Zilch. Nada,” he said.

All because of a Democrat by vendettas.

The poll reported that 73 percent of Democrats want to continue to investigate, which is up from a March where 66 percent said the same thing.

The majority, though, are tired of the nonsense.

58 percent of voters say they’ve heard about all they’re willing to hear on the Mueller report — which means that the majority of the U.S. believes that special counsel Robert Mueller has sufficiently presented and concluded the investigation.

And Mueller doesn’t seem keen on coming out of the woodwork to testify either. He has the right to appear on Capitol Hill to answer questions… but he’s reportedly unwilling to become a “political pawn” for Democrats. He told Rep. Adam Schiff he would only testify in private.

Mueller has zero interest in being grilled on an investigation he already spent two years and 400 pages on.

In other words, both the investigators and American voters are saying it’s time to go back to business as usual.