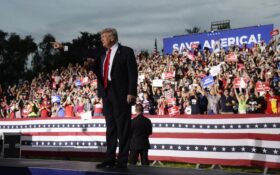 Former President Donald Trump has been issuing endorsements for the midterm elections later this year, the first election year since his departure from the White House.

Kemp once ranked among Trump’s allies. He prioritized economic stability during the pandemic, and he addressed fears of election fraud by signing election integrity legislation.

However, Trump turned on Kemp after Georgia’s blue shift in the 2020 elections.

“The Democrats walk all over Brian Kemp. He was afraid of Stacey “The Hoax” Abrams. Brian Kemp let us down,” Trump said in a TV ad.

“David Perdue is an outstanding man. He’s tough. He’s smart. He has my complete and total endorsement. Vote for David Perdue.”

As a matter of policy, Perdue is campaigning on creating a new police force to ensure election integrity and on abolishing the state income tax to rely more on the state property tax.

However, as a matter of politics, Perdue has embarrassed himself often. He faced allegations of insider trading while in the Senate. Last year, he lost a Senate election to Democrat Jon Ossoff, a 33-year-old investigative journalist. Before that, Republicans had won every Senate election in Georgia for 24 years.

Plus, Perdue has faced criticism for his record on outsourcing from his previous career as a management consultant, and senators tend to pull lower favorability ratings than governors.

Sure enough, Kemp is polling 11 points above Perdue, according to a Fox News poll released Tuesday. He was polling nine points above Kemp in a earlier poll by Fox 5 Atlanta.

“[Trump’s endorsement] might not have as big an impact when both commodities are known,” Jay Williams, a strategist from Atlanta, told The Washington Times Wednesday.

Trump boasts a net favorability rating of 79% in Georgia, according to the Fox News poll.

However, some pollsters have warned the former president against tarnishing this reputation by endorsing a losing candidate.

“To what level, I don’t know, but certainly the national media will seize on it as evidence that he’s not able to do what they thought he could do,” Mike Towery, a Georgia pollster, told The Washington Times. “I think that there’s no doubt that will take place. And so, yeah, there will be some damage done to him.”

Trump has also endorsed candidates with better polling. He endorsed the primary challenger to Rep. Liz Cheney, R-Wyo., and the challenger won the Republican Party’s straw poll earlier this year.

Georgia will hold its Republican primary on May 24. The winning candidate will presumably progress to a general election against Stacey Abrams, the statehouse’s party leader running unopposed for the Democratic nomination.