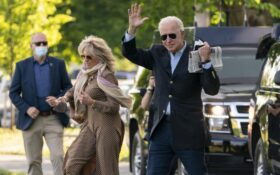 Americans will head to the polls in three weeks, and pollsters are scrambling to document the final stretch of the campaign.

Between Oct. 9 and Oct. 12, The New York Times used live phonecalls to poll 792 likely voters nationwide… and they found some bad news for Democrats, who were struggling with a key constituency.

49 percent of likely voters planned to vote for a Republican on Nov. 8, compared to only 45 percent for a Democrat.

The Democrats have been losing ground since last month. They’ve slipped more than three points since September’s poll, when they were ahead on the generic ballot.

“The biggest shift came from women who identified as independent voters. In September, they favored Democrats by 14 points. Now, independent women backed Republicans by 18 points — a striking swing given the polarization of the American electorate and how intensely Democrats have focused on that group and on… abortion,” the Times pollsters observed.

It only gets bleaker from there.

The Democrats have lost their lead not only among female independents… but also among all women.

“The poll showed that Republicans had entirely erased what had been an 11-point edge for Democrats among women last month in 2022 congressional races to a statistical tie in October,” the Times continued.

“In a hypothetical 2024 rematch, Mr. Trump led Mr. Biden in the poll by one percentage point. Among women, Mr. Biden was ahead of Mr. Trump by only four points, compared with the margin of more than 10 points that Mr. Biden had in the 2020 election, according to studies of the national electorate for that election.”

The ruling party has historically lost House seats during the midterm elections. In this cycle, President Joe Biden is suffering from a dismal approval rating, and the Republicans are running attack ads linking down-ballot Democrats to an unpopular president.

This month, Biden has campaigned for some down-ballot Democrats, like Oregon’s candidate for governor. Still, he’s largely remained in D.C.

Instead, the downballot Democrats — struggling to recruit female voters — are making campaign stops with a more popular member of Biden’s White House.

In the span of 27 hours, the first lady appeared in Georgia with governor candidate Stacey Abrams Georgia governor, toured Florida with Senate candidate Rep. Val Demings, and even gave an interview with Newsmax.

Still, the first lady is dealing with her own popularity problems. She appeared at a Philadelphia Eagles game, and she faced audible booing from the crowd, according to tweets from eyewitnesses.

A stadium full of Eagles fans booed Jill Biden tonight, they must all be from the 5 surrounding counties.