Poll shocker! Biden scrambling after he learns... - The Horn News 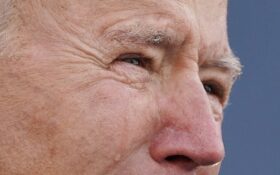 During the 2020 campaign, Joe Biden promised to “unify” Americans.

But a new poll shows that in just 87 days, President Biden has divided Americans more than any time in modern history.

A new Gallup poll finds the biggest-ever gap between members of the two political parties—a whopping 86 percent gulf between Republicans and Democrats.

While 96 percent of Democrats see Biden as a good leader, only 10 percent of Republicans agree.

America’s common ground is even more fractured than it was four years ago, when the vast majority of Democrats thought Russia colluded with President Donald Trump to “steal” the 2016 election from them.

Still, the division has ticked up nine more points under Biden than under Trump.

Gallup compared the same numbers for every president in the last 20 years, going back to George W. Bush in 2001—and Biden is the worst of the lot.

“Party gaps in approval ratings were about 30 points lower for Obama, Bush and Clinton than they have been for Biden,” Gallup reports.

Pollsters also found historic levels of division between American citizens based on education and sex—and near-records for race and age.

That’s a huge failure for Biden, who has promised to bring “unity” to America ever since being named president-elect.

“With the campaign over, it’s time to put the anger and the harsh rhetoric behind us and come together as a nation,” Biden said the day the media named him the winner of the 2020 election.

But during the election, an Associated Press poll found that 85 percent of Americans said the country was deeply divided over its values…and 37 percent believed Joe Biden would make matters worse.

It turns out, they were right.

Biden promised again to make “unity” his focus as president during his inauguration in January.

“Today, on this January day, my whole soul is in this: bringing America together, uniting our people, and uniting our nation,” Biden said…but then he went on to say America was riddled with “systemic racism,” and the division began.

Biden’s administration has begun with a hard-Left position on every issue…and just keeps moving left.

The only real “unity” Biden has pursued is the “Biden-Sanders Unity Task Force,” where socialist Bernie Sanders sketched out a far-Left agenda for Biden to follow the second that his hand came off the Bible.

Biden has shut down the KeystoneXL Pipeline, created a border crisis by ending President Trump’s border security measures, forced girls to compete against biological boys for sports scholarships, and made American taxpayers fund abortions around the world.

“We should ignore the unity talk because everything he has done leans far left,” wrote New York Post columnist Michael Goodwin.

Some of Biden’s actions have been thin-skinned and mean. He may have illegally fired administrators—including a woman taking scheduled maternity leave.

Meanwhile, the media churn out endless stories presenting Joe Biden and Kamala Harris as charming, trying their best to get Americans to fall in love with the Bidens and Harris-Emhoffs as much as “journalists” have.

“The corrupt sycophantic press corp will go along dutifully with this unity fiction, and express astonishment as the culture war it attempts to disguise continues to tear the country apart,” predicted Ben Domenech of The Federalist.

But more and more, the American people aren’t buying it.

Public opinion of Biden has been nosediving.

Less than half—48 percent—of Americans approve of the job Joe Biden is doing in office, according to a new Quinnipiac poll.

As early as the beginning of this month, Biden’s approval rating stood at 61 percent, according to the HarrisX poll.

What explains a 13-point drop in just days? After all, Democrats still support Biden by near-10-percent levels.

Biden’s failures must be making a dent on registered independents.

Independents aren’t partisan. They don’t care about which party is winning or losing. They just care whether their lives are better.

Under Biden-Harris, their lives—and our country—are worse off. No amount of media spin can cover that up forever.

Goodwin hoped that at some point “the smoke will clear and voters will judge Biden on the merits of his own presidency.” It looks like that time has come.