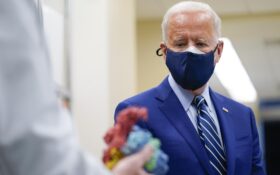 President Joe Biden’s first 100 days in office has been off to a shaky start. His focus on reining in the coronavirus during the early months of his administration has paid off, because he can check off many of his campaign promises centered on the pandemic.

According to the latest polling, Biden’s overall approval rating is the third-lowest of any president since World War II during his first 100 days in office.

“All told, 52% of Americans in the latest ABC News/Washington Post poll approve of Biden’s work in office,” ABC News reported. That’s lower than almost every president at 100 days in office since former President Harry Truman.

Biden’s approval rating has faltered despite huge support from the mainstream media. The evening news has given Biden 59% of positive press — compared to four years ago, when those news channels gave Trump 89% negative press.

“Biden’s honeymoon appears to be ending, if it was even there in the first place,” Rick Klein, ABC News’ political director, said. “What’s so striking here is, you can at the same time say President Biden is in so much stronger position than his predecessor, but so much weaker than almost everyone else that we’ve seen at this point in a presidency.”

Biden has delivered on some far-left climate change and economic promises since entering the White House.

But many issues have proved to be tougher for administration — including controlling illegal immigration, where Biden is grappling with how to enact promised reforms in the face of a steep increase in unaccompanied minors seeking to cross the border.

Even after spending trillions immediately, and promising more, @joebiden is relatively unpopular at the 100 days mark, beating only Ford and Trump. Americans may not be as easy as supposed. HT @JonathanTurley https://t.co/wKyVBCpGhD pic.twitter.com/orpaf4Aoey