Rising star Democrat is going down in flames, poll says - The Horn News 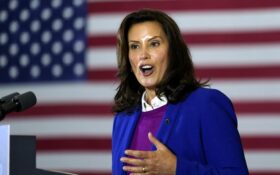 A rising Democratic star, who almost had Kamala Harris’ spot as Joe Biden’s vice presidential running mate, may be months away from seeing her political career go down in flames.

The Democrats put a huge bet on Michigan Gov. Gretchen Whitmer — and they’re about to lose, big time.

Biden considered Whitmer to be his running mate. And Newsweek reported on Thursday that Joe Biden had just named “rising political leaders like Michigan Gov. Gretchen Whitmer” to a council of governors to act as his special advisors. Before that, the party tapped Whitmer to give the official Democratic response to President Donald Trump’s 2020 State of the Union address.

They thought she was the next Hillary Clinton — and ironically enough the people of Michigan agree: Whitmer is a corrupt, unlikable hypocrite just like Crooked Hillary.

Gov. Whitmer kept the people locked down because of the coronavirus, while she and her husband ignored her own laws by jumping on private planes and laughing it up with her elite friends.

Whitmer issued bizarre orders, not just locking her citizens down but banning them from buying regular household items at the store, like paint. Her minions blocked off whole parts of grocery stores, if she let her people leave their homes at all.

When the state told Whitmer to back off and let them live their lives, she kept the emergency orders rolling out.

The Republican-controlled legislature rescinded Whitmer’s emergency lockdown powers last April — but she ignored them and just kept the commands coming, claiming she had special authority as governor.

She issued 123 executive orders for the COVID-19 lockdowns in her state. In the end, the Supreme Court had to slap her down and end the orders in a court ruling last October.

But while Michigan’s citizens were cooped up at home, Whitmer and her husband kept up their jet-setting lifestyle.

Last May her husband, Marc Mallory, applied for a boating license to get out on the Great Lakes for Memorial Day — and the governor admitted he name-dropped her to push it through faster. She said it wasn’t pressuring people through the abuse of power; she called it “a failed attempt at humor.”

It was Whitmer’s time to fly in March. After warning her people to “stay at home” to slow the spread (which was already slowed), she jumped on a plane to visit her father in Florida.

In order to try to avoid the press, she took a private plane — sort of the way Hillary Clinton set up a private email server to keep her messages hidden. The company Whitmer used wasn’t even authorized to charter flights… and Whitmer got caught making her sneaky, hypocritical move anyway.

Things got worse when she was busted breaking her own mask mandate at a restaurant with friends. Whitmer shrugged off her good times with her elitist friends: “I am human,” she said.

Now, new polls show she may be thrown out on her ear.

Her approval rating is under 50 percent, with 43 percent of Michiganders saying they disapprove of the job she’s done in Lansing. To make matters worse, that poll comes from Progress Michigan, a left-wing polling group. If anything, its polls would be more likely to favor the Democrat.

And Republicans look like they’re about to nominate a candidate who stands a strong chance of crushing her in the 2022 election.

Craig says he was raised a Democrat but has voted for Donald Trump twice. He’s pro-school choice, pro-life, and holds a concealed carry permit.

“I carry here today and will carry until the day I see the Lord,” he told voters in Jackson.

And the polls are good news — for Craig.

“Assuming Craig can outperform in Detroit because of his record as police chief, Michigan is definitely in play,” said former Michigan GOP chairman Saul Anuzis.

The Democrats bet on Whitmer to become the next face of the party, a leader of the future. And she’s about to lose to the party’s biggest nightmare: a black conservative.