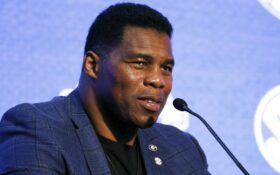 Republican Herschel Walker has taken the lead in the high-profile hypothetical matchup with Sen. Raphael Warnock, D-G.A. according to an Emerson College/The Hill poll released on Wednesday.

Walker has 49 percent of support among potential voters. Warnock has 45 percent, and 6 percent remain undecided.

The former Heisman Trophy winner and NFL star catapulted to the front of the Republican senate race when he announced his candidacy in August 2021. But Walker still needs to win the Republican nomination for Senate in late May… and that’s no certain feat.

After former President Donald Trump endorsed Walker in the race, establishment Republicans in the state have rallied to stop his campaign.

While his challengers trail Walker, they’re hoping to force a head-to-head primary runoff ahead of the November midterm election. Walker must win a majority of the vote to avoid a runoff.

“Folks, he can’t win in November,” Gary Black, Georgia’s Agriculture Commissioner and one of Walker’s primary challengers, warned. “The baggage is too heavy. It’ll never happen.”

Trump’s endorsement in the Peach State carries significant weight… but it is no guarantee.

He has also backed former Sen. David Perdue in the race for the Republican nomination for Georgia governor. But Perdue is trailing Gov. Brian Kemp by a significant margin, and “a majority (58%) of undecided Republican gubernatorial primary voters say Trump’s endorsement of Perdue has no impact on their vote,” Emerson College Polling executive director Spencer Kimball told The Washington Times.

In Trump’s push to fundamentally reshape the Republican Party, few places are a higher priority than Georgia.

Trump held a rally in Georgia two weeks ago with Walker, Perdue, Vernon Jones, and other Republicans he’s backed in the state. The campaign is emerging as an early, critical test of whether the former president can live up to his professed role as a kingmaker in the GOP.

There are warning signs for Trump. While Walker seems to be marching to victory, other races are more complicated. Jones, for instance, is now competing in a crowded congressional primary in which no one may clear the 50% threshold needed to avoid a runoff.

Trump has been obsessed with this once Republican stronghold since the aftermath of the 2020 campaign, when he became the first GOP presidential candidate to lose the state in 28 years. It could again be central to his political future if he decides to run for the White House in 2024.