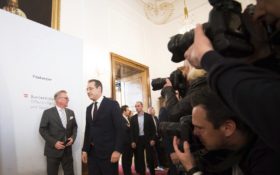 Heinz-Christian Strache, who resigned as Austria’s vice chancellor and the leader of the far-right Freedom Party over an influence-peddling video, says he’s ashamed of his behavior.

Strache’s lawyer released a statement Friday in which his client condemned the video showing him appearing to offer favors to a purported Russian investor at a boozy gathering on the Spanish island of Ibiza two years ago as “unlawfully and secretly produced.”

Strache says he’s filing criminal complaints against three unidentified people, alleging they were involved in producing the video or leaking it to two German publications.

Strache says he will not “dispute the utterances revealed by the video clip” but says they don’t reflect the “complete context” of the seven-hour meeting.

He dismissed as “absurd” reports that some scenes show him “using drugs and in sexual acts.”