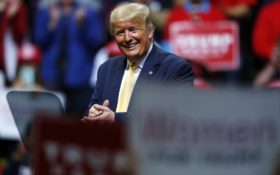 But folks in political circles know him well, because Norpoth is practically a “political psychic.”

And Norpoth has a message that’s driving the leftist media insane.

He says President Donald Trump is going to be reelected in November.

And it’s not going to be close.

With four months until the election — and the nation in the grips of a down economy and a pandemic — the media loves to tout polls showing Trump trailing challenger Joe Biden.

But Norpoth has developed a model that has correctly predicted five of the past six elections since 1996, and every single election but two in the past 108 years.

Norpoth says his model shows that Trump has a 91 percent chance of winning — as close to a guarantee as you can get.

Further, Norpoth says his model shows that Trump will get 362 electoral votes, which is far more than the 304 he earned in 2016 against Hillary Clinton.

So what’s different about Norpoth’s model?

It uses results from primary contests as the main indicator of which candidate is strongest. Trump fared much better in the Republican primaries than Biden, who had a bruising battle with Vermont Sen. Bernie Sanders.

The primary model would seem to offer a glimpse at how much enthusiasm supporters have for a candidate… and there’s long been evidence of an “enthusiasm gap” among Democrats who feel like they’re being forced to reluctantly support Biden.

But what about the two times in the past 108 years that the model got it wrong?

The two elections it missed were John F. Kennedy’s 1960 victory over Richard Nixon, which was one of the most closely contested elections in American history… and George W. Bush’s 2000 victory over Al Gore, where Bush actually lost the popular vote.

We can forgive Norpoth — and his model — for that.