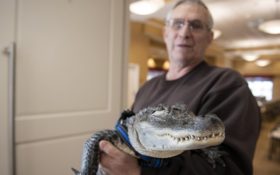 Police in Tennessee have asked residents not to toss drugs down the toilet, saying it could create “meth-gators” and stoned waterfowl.

Loretto Police Department issued the Facebook warning “on a more or less serious note” after arresting a man accused of trying to flush methamphetamine.

The statement says flushed items end up in retention ponds frequented by ducks and geese. It then warns that if the drugs made it far enough, “we could create meth-gators” in the Tennessee River.

In a follow-up post, the department noted that it was using humor to make its point.

Yale ecology professor David K. Skelly says rampaging meth-fueled alligators aren’t a real cause for concern but the department does have a point in recommending not to flush drugs. He says fish in rivers all over the U.S. have been affected by chemicals that leave our homes.