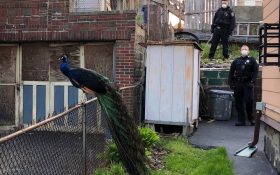 A Boston police officer used an electronic mating call Monday to help capture a peacock that had escaped from a nearby zoo.

An officer lured the curious peacock that had escaped from Franklin Park Zoo into a fenced-in yard while playing a mating call on his cell phone, The Boston Globe reported.

The officers on patrol in the Roxbury area were approached by a concerned citizen, who reported that the bird, named Snowbank, had escaped from the zoo, Boston police said in a statement.

“Additional officers arrived at the scene and were met by an extremely large, slightly intimidating, and quite beautiful, male peacock,” police said.

One of the officers began to look up a peacock mating call on his cellphone. When he played it, the 6-year-old bird was lured into the secure area and remained there until Boston Animal Control and zoo officials arrived.

Snowbank was then returned to the zoo and is reported to be doing well, according to zoo officials.

Normally, peacocks at the zoo are free-roaming but officials believe its possible that Snowbank was on a mission when he made his escape.

“It is currently mating season, and it’s possible he ventured out looking for love, in search of a peahen,” a female peacock, zoo officials said.