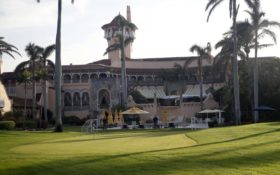 Since the August 8 FBI raid of former President Donald Trump’s Mar-a-Lago residence, the surrounding Florida areas have been on edge.

On Thursday, police and Secret Service agents were reportedly seen “swarming” the residence after a report of an unauthorized trespasser.

Palm Beach Police “scrambled” the president’s home and golf course after a scare, The Sun reported.

After a suspect was caught and removed, the Secret Service did a second sweep of the property.

BREAKING: Palm Beach Police tells us they responded to a trespassing call at Mar-a-Lago. Units were parked on the back side but have since left. We’re told secret service is doing a sweep. No other details being released. @WPBF25News

It seems the police were acting out of an abundance of caution. They were originally called at 8:08 a.m. Eastern to remove after a man refused to leave the property, the Palm Beach Police department said in a statement.

“We responded, issued a written warning for trespass, and the subject left the area,” the police said.

“This was a routine trespass complaint from our Department.”

Trump was not at the residence at the time of the trespass.