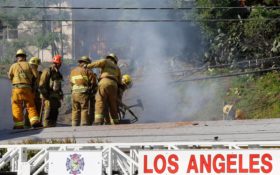 Investigators believe a Los Angeles man had argued with two men hours before he spread gasoline inside a music studio and set it ablaze, killing them and leaving two other people critically injured, police said Monday.

Investigators are still working to pin down a motive but believe Demery had been hanging out with two of the victims, 28-year-old Devaughn Carter and 30-year-old Michael Pollard, when an argument broke out, Hayes said.

Carter and Pollard, who police said were the “intended targets,” died. Two other people — a man in his 20s and a 15-year-old girl — were injured and remained in critical condition on Monday, police said.

The fatal fire was a “senseless and horrific crime,” Chief of Detectives Justin Eisenberg said at a news conference.

Los Angeles Fire Department arson investigators have not yet determined whether the building was in compliance with building codes or whether there were working smoke alarms, officials said.

“The direct nature of going after these individuals is obviously very heinous,” Hayes said. “Arson is a brutal crime and a terrible way to die.”

Demery, who has prior arrests for burglary and selling counterfeit goods, was being held without bail. A telephone number listed for him in public records rang unanswered Monday afternoon.