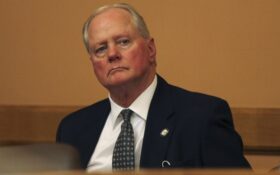 The Kansas Highway Patrol does not have a document it can make public on last week’s arrest of a legislative leader on suspicion of driving under the influence and attempting to flee law enforcement, a patrol official said Thursday.

The patrol’s Capitol Police division arrested state Senate Majority Leader Gene Suellentrop early March 16 on Interstate 70 near downtown Topeka after his SUV was reported traveling east in the highway’s westbound lanes. The Wichita Republican was booked into jail, but a judge released him hours later, saying there was not sufficient evidence to support his arrest.

Suellentrop has not been charged with a crime and has temporarily stepped away from most of the majority leader’s duties.

Luther Ganieany, the patrol’s general counsel, initially said the front page of an offense report with basic information might be available by the end of this week. But he said in an email Thursday that the patrol is not required to file such a report for alleged DUI incidents and didn’t.

Ganieany said other documents are investigation records that don’t have to be released under the Kansas Open Records Act and the patrol is legally barred from releasing criminal history information.