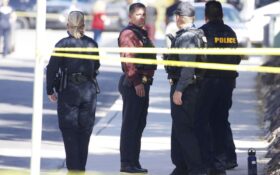 The University of Arizona has released the name of a professor who authorities said was fatally shot on campus by a former graduate student.

University President Robert Robbins identified the victim late Wednesday as Thomas Meixner, who had headed the school’s Department of Hydrology and Atmospheric Sciences.

Police said Meixner was shot Wednesday afternoon inside the Harshbarger Building, which houses the hydrology department.

Meixner was taken to a hospital, where he was pronounced dead.

Dervish was being held at the Pima County jail awaiting his initial court appearance. It wasn’t immediately clear what charges he might be face or whether he has a lawyer yet who could speak on his behalf.

According to campus police, someone called 911 at around 2 p.m. Wednesday asking for police to escort a former student out of the Harshbarger Building.. Balafas said someone recognized Dervish “and knew that he was not allowed inside the building,” although Balafas didn’t explain why.

Officers were on their way to the building when they received reports that a man shot and wounded someone before fleeing, Balafas said.

The building is near the university bookstore and student union, and campus alerts instructed people to avoid the area, which was under lockdown.

Classes, activities and other campus events were canceled for the rest of the day. Classes resumed on Thursday, but Balafas said the building where the shooting happened might remain closed.

Meixner earned a doctorate in hydrology and water resources from the university in 1999 and joined the faculty in 2005 before becoming the department head in 2019. He was considered an expert on desert water issues.

“We have lost a beloved member of our University of Arizona community,” Robbins said in a statement. “This incident is a deep shock to our community, and it is a tragedy. I have no words that can undo it, but I grieve with you for the loss, and I am pained especially for Tom’s family members, colleagues and students.”

It was 20 years ago this month that a disgruntled University of Arizona nursing student shot and killed three nursing professors before taking his own life.