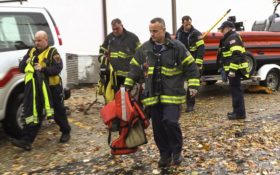 Authorities say a body has been recovered near where a suburban Chicago woman disappeared after going swimming in treacherous waters in Lake Michigan.

The Chicago Sun-Times reports a woman’s body was found Saturday in Highland Park, about 20 miles (32 kilometers) north of downtown Chicago.

The city of Highland Park has said 52-year-old Lena Lemesh , of Elgin, was among about 10 people in a “cold weather swim group” who went into the lake Nov. 4 at Park Avenue Beach, despite huge waves and fierce winds.

Forty-six-year-old Stanislaw Wlosek Jr. was pulled from the water. He was pronounced dead at a hospital and an autopsy determined that he had drowned.