Police on the hunt for..."Doodler" killer!? - The Horn News 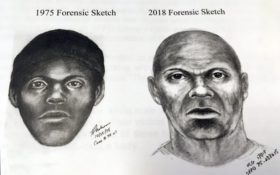 More than 40 years after a serial killer dubbed the “Doodler” terrorized San Francisco’s gay community, police released a sketch Wednesday of what the man might look like today and announced a $100,000 reward for details leading to his capture.

Police believe the killer stabbed at least five men to death from early 1974 to late 1975.

He became known as the “Doodler” after a victim who survived an attack told police the man was doodling while they talked at a late-night diner and said he was a cartoonist.

At a news conference, police released a pair of images that showed a 1975 sketch of the man and an “age-progression” showing what he might look like now.

“In the 1970s, this was gripping the gay community and San Francisco,” police Commander Greg McEachern told the news conference, saying authorities were releasing the new sketch in hopes of bringing justice to victims of the “horrendous homicides.”

It’s one of several cold cases, particularly serial crimes, being re-examined after the capture last year of the notorious “Golden State Killer” through DNA analysis, McEachern said. Police have submitted DNA samples from some of the 1970s crime scenes in the Doodler case and were waiting for results from a lab.

Police described the killer as an African-American male, about 5 feet, 11 inches tall with a lanky build who was likely in his early 20s during the attacks.

At the time, a witness was able to give investigators a description of the attacker, leading to a man being detained in 1976 but never charged.

McEachern said police have interviewed the man since returning to the case and he remains a person of interest. His name was not released and authorities declined to say if he resembled the man in the sketches.

The killer targeted white men he met at after-hours gay clubs and restaurants in San Francisco. He usually sketched them before having sex and stabbing them.

The bodies of four men were found along the beach. Another stabbing victim was found in Golden Gate Park.

“Even now, the story gives me chills,” said prominent gay activist Cleve Jones, who recalls how the string of killings terrified the gay community. “Imagine, you’re out at a club having a drink, and someone hands you a sketch they’ve done of you. I can’t think of a more disarming ploy to gain someone’s trust.”

An Associated Press story from 1977 quotes police as saying the suspect at the time could not be charged because three survivors, including a “well-known entertainer” and a diplomat were reluctant to “come out of the closet” to testify against him.

AP interviewed gay rights advocate Harvey Milk at the time about the victims’ refusal to testify.

“I can understand their position,” Milk said. “I respect the pressure society has put on them.”

The interview with AP came just over a year before Milk, the first openly gay man elected to public office in the U.S., was assassinated.

Police on Wednesday also announced a reward of $100,000 for information leading to the arrest of the killer and released audio of an anonymous call made to police on Jan. 27, 1974, reporting a body found near Ocean Beach in San Francisco.

Police are seeking information on the identity of the caller, who declined to give his name.

“I believe there might be a dead person,” the caller said. “But I didn’t want to get too close to him because you never know what could happen.”