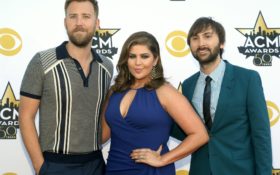 An Ohio police department’s entry in a lip sync challenge sweeping the nation has gotten rave reviews — including from the country music group whose song is featured.

Middletown police Chief Rodney Muterspaw says he’s “overwhelmed” by the response to a video his department created as part of a national lip sync challenge among police departments. The Hamilton-Middletown Journal-News reports among fans of the video is the band Lady Antebellum, which tweeted that the police department’s cover of its song “Need You Now” is “amazing.”

Since its posting on Wednesday the video has been viewed more than 2 million times.

The police chief says it took about an hour to shoot the video. He says some officers were reluctant at first but everyone seemed to enjoy the experience.