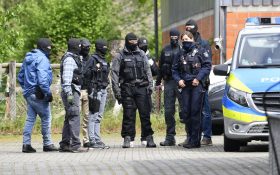 German police say the grisly find of an ape’s hand and foot in a forest west of Munich appears to be less nefarious than previously thought, and certainly not as outlandish than wildly speculative tips they’ve received.

The cleanly severed hand and foot, complete with skin, hair and nails, were discovered about a week ago near the Bavarian town of Grafrath by a forester’s dog. Tips came in, including one suggesting the find was evidence the government was carrying out coronavirus experiments on monkeys, police told the dpa news agency Thursday.

But after examination of the foot and hand, which appear to come from a chimpanzee, experts concluded they had been preserved with formaldehyde or another chemical used to keep scientific specimens.

“This makes it possible that the parts are significantly older than initially thought,” Michael Fischer, a police spokesman in nearby Fuerstenfeldbruck, told dpa. “The good news is that nobody has to worry that an ape was slaughtered in Fuerstenfeldbruck last week.”

Police are still trying to figure out how a chimpanzee’s parts ended up in a German forest, but say it now seems likely it is at most an administrative offense rather than a crime.

“And it could already be past the statute of limitations,” Fischer said.