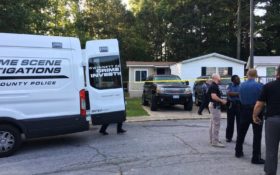 Police found four young children and their father apparently stabbed to death in a home outside Atlanta and took the mother into custody early Thursday.

The woman was detained by police after the bodies were found inside the home in Loganville, Gwinnett County police Cpl. Michele Pihera told reporters at the scene. Police later issued a statement calling her a “suspect” in the deaths, although no charges have been filed.

“She was quickly taken into custody and right now she’s at Gwinnett County Police Headquarters being interviewed,” Pihera said. Police have not said whether she was injured.

“Right now we believe we have everybody involved in this crime,” Pihera said, adding that she does not want people in the community to think that a dangerous person is at large.

Early indications are that a knife was used to attack the five, though a medical examiner will make the final determination about the cause of death, she said.

Another child was taken to a hospital with injuries described as serious, police said.

The four children killed appear to be under age 10, Pihera said. The man, whom police said was their father, was in his mid-30s, she said.

BREAKING: A new version of the Bible has been discovered (sponsored)

Police said in a statement that a woman inside the home called police at 4:47 a.m. Thursday to report a stabbing and officers answering the call found the five bodies inside. They did not say whether the woman who placed the call was the same person they are now interviewing.

Outside the single-story home with white paneling and black shutters, neighbors sat in their front yards. Crime scene tape surrounded the home and parts of the yard in the Loganville area, about 30 miles (48 kilometers) east of Atlanta.