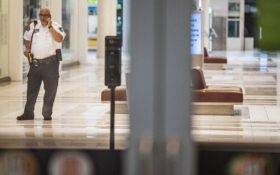 Someone fired shots Thursday at the Mall of America in suburban Minneapolis, sending shoppers running for cover, but police said it did not appear anyone was injured.

Bloomington police also said they were still searching for a suspect after securing the scene shortly before 6 p.m. They said a lockdown that had forced some shoppers to shelter in place, while others fled, was in the process of being lifted, but that the mall would not reopen Thursday.

Video posted to social media showed what appeared to be a man shouting as he walked near the complex’s Nike store, with at least three apparent gunshots.

Bloomington Police Chief Booker T. Hodges during a news conference Thursday night at the mall said two groups got into an altercation at a store, one group left, but someone in that group decided to fire three rounds into a store with people around.

“Fortunately, at this time it doesn’t appear that anyone was injured,” Hodges said.

Police are looking for two people but only one had a weapon, Hodges said. He said a Bloomington police officer was on the scene within 30 seconds.

Hodges said if someone decides they have no regard for human life, “I don’t know what we can do about that.”

“Guns are not allowed on Mall of America property,” Jasper said.

Gov. Tim Walz tweeted: “Tonight’s violence at the Mall of America is unacceptable. These brazen incidents will not be tolerated.”

The mall, which opened in 1992, is the largest in the U.S. and is a tourist destination and community gathering spot.

Video posted online showed shoppers fleeing from the amusement park at the interior on the giant mall’s ground level, holding their children’s hands and clutching their bags. Still other video showed a pair of police officers, including one with a rifle, moving through the mall, and people walking quickly away from the mall’s large interior atrium area.

Trent Turner, a salesman at a DSW shoe store one level below the Nike store, said he was near the back when he heard gunshots. “Then I saw everyone stampeding toward the back,” he said.

One woman tweeted that she was shopping for clothes for high school senior pictures with her 17-year-old daughter when the store manager told them to “move as far back as possible.” The woman said she was in a fitting room with her daughter. Another person posted video of dozens of people said to be gathered in the basement as warnings to “please shelter immediately” repeated over mall speakers.

A woman who gave her name only as Tara told The Associated Press that she and a friend were among dozens of people who ran down a hallway to get out of the mall.

“We were in the Lululemon store and I just saw people running and he was in the dressing room and I started banging on the door to get him to come out and he didn’t have a shirt on so we just ran out of there,” she said.

The Mall of America bans guns on its premises, according to its website. The mall does not have metal detectors and shoppers are not searched upon entry. It was the scene of a shooting on New Year’s Eve, when two people were wounded during an apparent altercation.