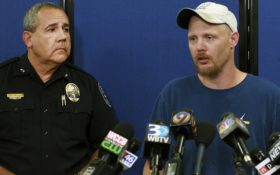 The chief of a North Carolina police department said Thursday he was “heartbroken” over the discovery of a body believed to be that of a missing 6-year-old boy.

Gastonia Police Chief Robert Helton fought back tears and a breaking voice during a news conference in which it was announced officials believed the body searchers found was that of Maddox Ritch.

“Our community’s heartbroken. This is not the end that we hoped for,” Helton said. “I’ve lost a lot of sleep this week worrying about Maddox.”

Gastonia Fire Chief Phil Welch said the body was found in a creek, slightly more than a mile (1.6 kilometers) east of Rankin Lake Park, by a searcher who was walking down the middle of the creek as his partners stood on the bank. He said the area had been searched previously by drones, all-terrain vehicles and foot patrols.

Welch said a crew of 15 searchers returned to the creek and discovered the body.

“There is no sense of accomplishment here today,” Welch said. “There is grieving down at our command post.”

FBI agent Jason Kaplan, also fighting tears, said the investigation into what happened to Maddox will continue. He said the water wasn’t more than 3 feet (0.9 meters) deep at the spot where the body was found, adding that it’s too early to say whether foul play was involved. Neither he nor the other officials would provide additional details regarding the body being found, including how long the body had been in the creek.

Last Saturday, Maddox Ritch’s father said the boy ran off from him and a friend at the park and disappeared before he could catch up to him.

The news release says the boy’s parents have been notified about the body being found, and police scheduled a news conference for later in the afternoon.

Both parents went before the media this week to plead for any information that would lead to the discovery of Maddox, who was autistic. On Wednesday, Ian Ritch appeared on national television and at a news conference to repeat the pleas.

According to the boy’s father, Ian Ritch, Maddox was about 25 feet to 30 feet (7 meters to 9 meters) away before he broke into a sprint just as a jogger passed them. The father said he is a diabetic and because he has neuropathy in his feet, he has trouble running.

“He likes running,” Ritch said. “I couldn’t catch up with him. I feel guilt for letting him get so far ahead of me before I started running after him.”

Ritch said the boy looked back at him and laughed, adding that he would slow down and then speed up again. With the help of the friend, Ritch searched for his son but couldn’t find him. Park personnel also joined in the search but didn’t see Maddox, either. After an hour, Ritch called 911, saying he delayed that call because he thought he would find his son and there was no reason to call police.