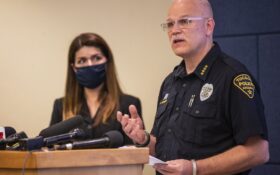 The mayor of Tucson, Arizona, said Thursday that the city’s police chief should stay in his job, even as criticism mounts over the death of a young Hispanic man while handcuffed in police custody.

Mayor Regina Romero, a Democrat, said Chief Chris Magnus should not resign because he has improved the police department since he took charge four years ago.

“Chief Magnus has brought forward-thinking changes to (department) policies, practices and trainings, and has built strong relationships with our community,” Romero wrote.

Magnus offered his resignation during a news conference on Wednesday in which police showed video of the April 21 death of 27-year-old Carlos Ingram-Lopez.

The death wasn’t made public until this week, and Magnus was heavily criticized for failing to disclose it earlier.

Ingram-Lopez’s family and friends plan to speak at a vigil later Thursday and call for accountability, a thorough investigation and an end to police brutality.

Ingram-Lopez’s case has sparked outrage as protesters around the country decry police brutality. A hashtag for “ayudame, nana”— “help me, grandma” has circulated widely to bring attention to some of his last words as he pleaded for help.

Online tributes for Ingram-Lopez show a glowing new father with a baby girl; there are pictures of a young Ingram-Lopez dressed as a pumpkin for Halloween and others showing him blowing out candles on a Mickey Mouse cake.

Ingram-Lopez died while handcuffed, face-down and covered with a thin blanket after police responded to a call from his grandmother, who said he had been acting erratically at her home.

The medical examiner’s office didn’t determine a manner of death but said Ingram-Lopez died of sudden cardiac arrest while intoxicated by cocaine and physically restrained.

Video from the officers’ body cameras show a hysterical Ingram-Lopez ignored by officers as he repeatedly begged for water. He screamed, cried and whimpered for minutes while he was on the ground and then suddenly stopped making noise. Officers administered an overdose antidote and attempted CPR, but Ingram-Lopez died at the scene.

Magnus said three of the officers who responded “committed multiple policy violations and failed to handle the incident consistent with their training.”

They resigned but would have been fired if they had not, Magnus said.

Magnus was appointed to his job in 2016. Along with supporting him, Romero said it is time for the police department to rebuild public trust by being more transparent, ensuring accountability and “and re-imagining how we provide safety to our community.”