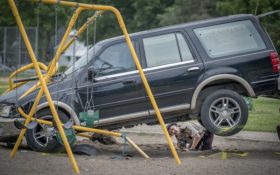 An unlicensed driver being chased by state troopers plowed into a Minneapolis playground, injuring three young siblings, one of them critically, authorities said.

State troopers tried to stop the 27-year-old Richfield man for speeding on Interstate 94 on Monday, but he tried to flee, authorities said. He eventually tore through tennis courts and smashed into the playground near the Jenny Lind Elementary School, hitting young Kayden, Konnor and Lillianna Peltier and coming to a halt entangled in a swing set, authorities said.

The driver, Kabaar Powell, remained jailed without bail Tuesday on suspicion of criminal vehicular operation and fleeing police. He hadn’t been charged as of Tuesday morning and jail records didn’t list an attorney for him.

The children’s aunt, Devin Brinkley, said 2-year-old Kayden was in critical condition heading into surgery at North Memorial Medical Center in Robbinsdale on Monday night. She said Lillianna, 4, was in stable condition with bleeding on the brain and that Konnor, 3, was traumatized but had minor injuries.

“My sister’s husband was there and watched his children get run over by a car. I can’t imagine. I can’t even fathom how I would feel,” Brinkley said.

She said her sister, Nicolle Peltier, was taking a test at the school while her husband, Kyle, watched the children play outside. The family lives in St. Paul.

“To take them to the park and this happens to them? Oh lord. I just can’t imagine,” said their grandmother, Diana Peltier.

State Patrol Capt. Jason Bartell said at a news conference Monday that two troopers suffered minor injuries while apprehending Powell after he tried to run, and that a gun was found in his vehicle. He said the troopers followed the agency’s chase protocol.

Powell hasn’t had a valid driver’s license since 2014, Department of Public Safety spokesman Doug Neville said. In 2015, he was convicted of driving with a suspended license, and he has earlier convictions dating back to 2010 for speeding and twice for not having the proper type of license.

“It’s pretty ridiculous when you are being stopped and you just don’t pull over. And recklessly drive through innocent children and innocent people,” Brinkley said.