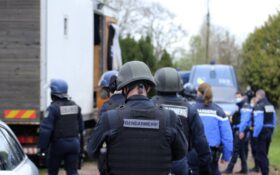 An alleged organizer of an illegal New Year’s Eve rave that at least 2,500 people attended for more than a day in western France was charged Monday with endangering lives amid a coronavirus curfew and other restrictions.

The 22-year-old man also faced property damage and drug charges among other offenses, and was placed in custody, prosecutor Philippe Astruc told a news conference. The suspect acknowledged participating in the organization of the event, Astruc said.

Ravers from France and abroad converged Thursday night on a hangar in Lieuron, in Brittany, to party into the new year. They left Saturday morning about 36 hours later. Officials said the partygoers attacked the police on the first night, torching a police vehicle and slightly injuring three officers with bottles and stones.

The suspect was arrested Saturday after a police search found money, illegal drugs and sound equipment in the Brittany town of Iffendic.

Astruc said investigators were working to identify other organizers in order to prosecute them.

Police have fined more than 1,600 people, including 1,200 for violating virus-related rules and over 200 for drug-related offenses, Astruc added. Less than 5% of participants were wearing a mask during the party, he said.

The investigation also showed that illicit drugs were supplied at the site, the prosecutor said.

The party took place despite France’s nationwide nighttime curfew, which seeks to dissuade people from gathering during the pandemic.

The Regional Health Agency of Brittany warned that partygoers had a high risk of spreading the virus and urged participants to self-isolate for a week and get a test in seven days.