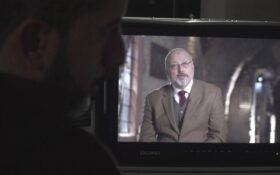 German police called to the scene of a suspected shooting found a man who had fallen asleep with an action film running at top volume on TV.

The cause of the disturbance was tracked down quickly once officers had called in a locksmith to open a locked door — a slumbering man in front of a television showing an action film.

The 34-year-old, who wasn’t registered as living at the address, was taken to the police station but let go after his identity was established.