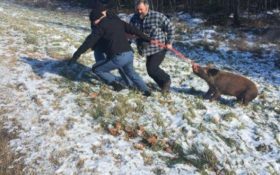 Maine State Police say they helped corral a rather “unruly’ pig on the run along Interstate 95.

State police say in a Facebook post they were alerted to the “uncooperative” pig along the interstate in Palmyra on Wednesday.

On Nov. 14, Maine State Police were alerted to an unruly subject on the interstate near Mile Marker 155 Northbound. Cpl….

Police say the pig was spotted several times over the past week, but had managed to elude capture.

Authorities say Cpt. Rick Moody and Trooper Jeremy Caron moved the pig off the highway with the help of a town animal control officer.

When asked if police read the pig its Miranda rights, police jokingly responded “he waived the right to remain silent.”