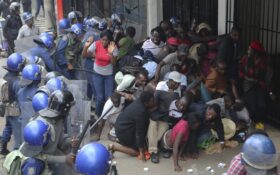 Three young Zimbabwean opposition activists who were reported missing following a protest over COVID-19 lockdown measures this week were being treated at a hospital Friday after asserting they were abducted and sexually abused by suspected state security agents.

The three women, including the country’s youngest parliament member, Joana Mamombe, were allegedly arrested at a roadblock after Wednesday’s protest in the capital, Harare, but family members and lawyers failed to locate them.

Police denied they arrested or held the trio, saying they were unaware of their whereabouts. The women had been protesting what they called deepening poverty and lack of social protection measures during the weeks-long lockdown.

The activists were later found by a “sympathetic villager” who heard their cries for help after they were dumped about 90 kilometers (55 miles) from Harare, Richard Chimbiri, the father of one of the women, told reporters outside the hospital.

“One can’t even talk, the other is just crying and another has been taken for some tests. They were seriously beaten up and stripped of their clothing. They are in pain, they are in bad shape,” he said.

Zimbabwe’s security agents have a history of abducting and torturing opposition and civil society activists viewed as anti-government. Many are later found abandoned, although some, such as Itai Dzamara, a journalist abducted in 2015, are still missing.

One of the three women, Cecilia Chimbiri, spoke briefly from a hospital ward. “They kept touching me all over the body and also beat us using the butt of their guns,” she said, writhing in pain.

The Associated Press does not name victims of sexual assault but the named women gave permission to be identified.

Chimbiri said they were stopped by police at a roadblock and taken to a police station where they were bundled into a private car, hooded and taken away.

“They were arrested at a roadblock and taken away from a police station by supposedly unknown people, so we hold the police responsible,” Maureen Kademaunga, the opposition MDC party secretary for welfare, said at the hospital. Opposition leader Nelson Chamisa visited the women there.

Mamombe, the 27-year old lawmaker, was visibly in agony and could barely talk as she was wheeled from an ambulance.

Tempers flared outside as family members tried to gain access to the women while hospital staff tried to ensure social distancing.