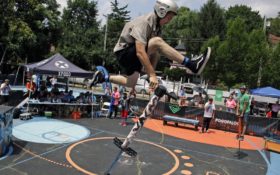 Pogopalooza, known as the World Championships of Pogo, is bouncing into Pittsburgh this weekend.

Extreme pogo stick athletes from around the world are coming to town to show off their huge tricks and flips to compete for world titles in such categories as High Jump and Best Trick.

The events on Saturday and Sunday aren’t just for the grown-ups. Pogo-users under the age of 15 can enter a “bounce off” competition and those who bounce the longest get a free pogo stick.

Visitors can try their hand at pogo sticking in a free jump area that will have pogo sticks of all sizes.

In addition to the main competitions, the pogo athletes will be attempting to break three Guinness World Records over the weekend.