Poacher looking for love...exposed on dating app!? - The Horn News 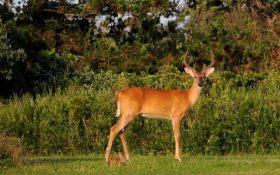 An Oklahoma woman looking for love got more than she bargained for when she unwittingly shared her exhilaration about illegally shooting a “bigo buck” on a dating app with a state game warden.

Oklahoma Game Warden Cannon Harrison says he uncovered the poaching in a conversation on Bumble with a McIntosh County woman.

She talked about using a spotlight to shoot the deer at night, outside the rifle season.

The woman only harvested the head and back-strap meat — and she sent Harrison pictures as proof.

The woman has pleaded guilty to charges of improper possession of an illegally taken animal and taking game out-of-season. She and an accomplice face $2,400 fines.

The incident was posted to the Oklahoma Game Wardens Facebook page on Sunday night.