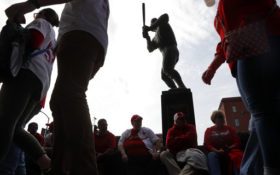 Leave it to Madison Bumgarner to get baseball off to a smashing start.

Before the World Series champion Chicago Cubs took the field and after the New York Yankees lost their sixth straight opener, Bumgarner struck.

The San Francisco ace, known for his dominant pitching in October, provided an opening day jolt by hitting not one, but two home runs Sunday for the Giants.

Not exactly what Henry Sands came to see at Chase Field. After watching his team lose 93 times last season, the Diamondbacks fan — every fan, really — hoped this would be their season.

“It is the beginning of the year, it is baseball again. It is something I have to look forward to, it is home,” Sands said. “The Diamondbacks are tied for the top, then they work their way down. But first is the goal.”

Exactly where the Cubs finished last November, winning a Game 7 thriller in Cleveland to capture their first World Series crown since 1908.

The Cubs opened Sunday night at St. Louis, and fans of the longtime rivals mixed and mingled outside Busch Stadium before the Cardinals rallied for a 4-3 win on Randal Grichuk’s RBI single in the ninth.

Ted Summers and Katie Moll, both from Manchester, Missouri, walked hand in hand along the concourse. He wore a Cubs shirt, hers featured St. Louis star Yadier Molina — earlier in the day, the Cardinals catcher added $60 million and three years to his contract.

They were still coming to grips with the Cubs wearing the crown.

“It was weird,” Moll said. “I don’t know how to explain it. It was just, hard to believe, I guess. Never going to happen again. It’ll take another 108 years.”

“I get that all the time,” Summers said.

There were three games Sunday, with all the other teams in action Monday.

From Fenway Park, where snow from a weekend storm was cleared away, to Dodger Stadium, where Vin Scully will be absent from the broadcast booth for the first time since the 1950 opener, it was time to get back to business.

A sellout crowd was expected at Camden Yards, 25 years after the stadium opened in Baltimore and began a boom of retro-style ballparks.

“I just want the weather to be good, the beer to be cold, the baseball to be good, everybody has a great time, the Orioles win and they want to come back,” he said. “In that order.”

For all the optimism and excitement, there figured to be a somber pregame tone at Target Field. Before Minnesota hosted the Royals, the Twins planned a tribute to Royals pitcher Yordano Ventura, who died at 25 in a car crash during the winter.

“Obviously it’s going to be tough. He’s been on your minds ever since it’s happened,” Royals star Eric Hosmer said. “We’ll see if we can lock it in for a couple of hours, try and get a win and get done with the game and continue to live out his legacy and celebrate his life.”

The first game of the 2017 Major League Baseball season was in Tampa Bay, and the afternoon at Tropicana Field began with a minor glitch when the Yankees’ replay system was a bit blurry.

Not much went right for New York once play began. Showing that spring training stats often don’t mean much, the Yankees — who had the best record in exhibition play — and ace Masahiro Tanaka — who had the top ERA — got roughed up by the Rays, 7-3.

Corey Dickerson of the Rays singled for the first hit of the new season and teammate Evan Longoria launched the first home run.

With baseball searching for ways to speed up the action, the Yankees and Rays didn’t add much pace to any pace-of-play approach. Their game took 3 hours, 21 minutes.

Tom Giordano didn’t seem to mind. At 91, the former big leaguer enjoyed his 71st pro opening day, now working for the Atlanta Braves as a special assistant to the general manager.