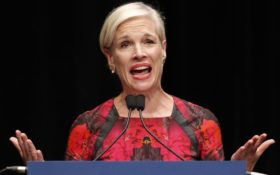 Former Planned Parenthood President Cecile Richards has no problems with unborn babies being murdered in her clinics — but she will not allow a dog to suffer the same fate.

The nation’s largest abortion provider suggested on Twitter that adopting is more humane when it comes to animals.

Richards posted a photo to Twitter of her dog with the hashtag #AdoptDontShop, advocating for more people to save a dog’s life by adopting them from a kill shelter, rather than buying one from a breeder or shop.

“Heading out on book tour for TWO WEEKS! Going to miss this guy though Garfield, not so much. #MakeTroubleBook #AdoptDontShop #Dachshund,” she tweeted on Tuesday.

Heading out on book tour for TWO WEEKS! Going to miss this guy though Garfield, not so much. #MakeTroubleBook #AdoptDontShop #Dachshund pic.twitter.com/hUbME9tJxc

Ironically, Richards is the president of a company that reportedly performs 113 abortions for every adoption referral.

Planned Parenthood claims to be providing “healthcare” to women in need, but the disturbing truth is they are focusing more on death of unborn babies.

Why does this woman care more about the lives of dogs than she does about babies?