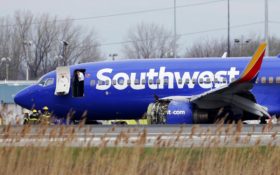 A Southwest Airlines jet made an emergency landing at Philadelphia’s airport Tuesday with part of the covering from its left engine ripped off and a window damaged.

It wasn’t immediately known if anyone on board was injured, and neither the airline nor the Federal Aviation Administration explained what went wrong.

Southwest said there were 143 passengers and five crew members on board the Boeing 737, which was headed from New York’s LaGuardia Airport to Dallas’ Love Field. Passengers were seen walking off the plane onto the tarmac at the airport after landing around 11:20 a.m.

The Philadelphia airport tweeted that Flight 1380 “landed safely at PHL and passengers are being brought into the terminal.” No other details were given.

The Federal Aviation Administration said that the plane landed after the crew reported damage to one of the plane’s engines, along with the fuselage and at least one window.

Passenger Marty Martinez did a brief Facebook Live posting while wearing an oxygen mask. He posted, “Something is wrong with our plane! It appears we are going down! Emergency landing!! Southwest flight from NYC to Dallas!!”

After the plane landed, he posted photos of a damaged window near the engine.

News helicopter footage showed damage to the left engine and the tarmac covered with firefighting foam, although there were no signs of flames or smoke.

Tracking data from FlightAware.com shows the flight was heading west over New York’s southern tier when it abruptly turned toward Philadelphia.

It is the world’s largest operator of the 737. The Boeing 737 is the best-selling jetliner in the world and has a good safety record.

Investigators are likely to take apart the failed engine from Tuesday’s plane and examine maintenance records as they try to piece together the cause of the explosion.

The engine failure was reminiscent of a similar event on a Southwest Boeing 737-700 jet in August 2016 as it flew from New Orleans to Orlando, Florida.

Shrapnel from the engine left a 5 by 16 inch hole just above the wing. Passenger oxygen masks dropped from the ceiling. Pilots landed the plane safely in Pensacola, Florida.

Investigators with the National Transportation Safety Board said one of the engine’s fan blades broke off from the hub during the flight. The broken edge of the blade showed crack lines consistent with metal fatigue.

The NTSB was sending a go-team to the airport in Philadelphia to investigate and planned a 3 p.m. news conference.