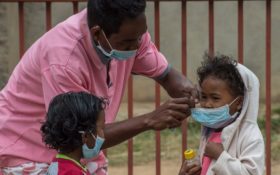 Authorities in Seychelles say a man was diagnosed with pneumonic plague after returning from Madagascar, where a plague outbreak has killed dozens of people.

The Seychelles News Agency reported Wednesday that the patient arrived on the main island of Mahe on an Air Seychelles flight on Oct. 6. The airline has since suspended its Madagascar flights.

The agency says Seychelles health officials are monitoring 258 people, including passengers and crew from the flight carrying the man who fell ill, as well as his family members and patients at a health center where he went.

Those who died in Madagascar include a basketball coach from Seychelles who was participating in a tournament in the capital, Antananarivo. The outbreak began after a plague death in Madagascar’s central highlands in late August.