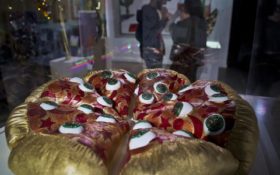 The owner of a pizza shop used his available resources to fend off a robbery attempt by a man with a machete outside his store in Delaware, police said.

He threw a pizza at him.

It happened Friday as the owner of Stargate Pizza in Greenwood was closing down his shop for the night, Delaware State Police said in a news release. The owner told troopers that a man with a machete approached him demanding money. He said he told him he didn’t have any, and threw a pizza at him, causing the machete-wielding man to flee in a car.

Troopers say the shop owner was not injured. They’re asking anyone with information to contact state police. The news release doesn’t say how the pizza was disposed of.