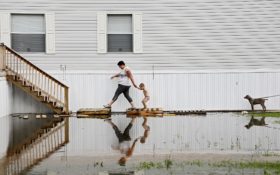 The National Weather Service confirmed that the large and destructive tornado moved over Jefferson City shortly before midnight on Wednesday.

“Across the state, Missouri’s first responders once again responded quickly and with strong coordination as much of the state dealt with extremely dangerous conditions that left people injured, trapped in homes, and tragically led to the death of three people,” Gov. Mike Parson said.

Kenneth Harris, 86, and his 83-year-old wife, Opal, were found dead Wednesday night about 200 yards from their home outside Golden City, Missouri State Highway Patrol Sgt. John Lueckenhoff said. Betty Berg, 56, also was killed and her husband, Mark, was seriously injured when their mobile home was destroyed just west of the city, Lueckenhoff said.

The storm also ripped a roof off a fertilizer plant in the area, prompting a precautionary evacuation of 1-mile radius because of a possible chemical leak.

The severe weather moved in from Oklahoma, where rescuers struggled to pull people from high water. This week has seen several days of tornadoes and torrential rains in parts of the Southern Plains and Midwest.

Jefferson City’s damage spanned about a 3-mile area, said Police Lt. David Williams. About 20 people were rescued by emergency personnel, and although there were no reports of missing people, authorities planned door-to-door checks Thursday, he said.

The weather service reported that a “confirmed large and destructive tornado” was observed over Jefferson City at 11:43 p.m. Wednesday, moving northeast at 40 mph (64 kph). The capital city has a population of about 40,000 and is located about 130 miles (209 kilometers) west of St. Louis.

Williams spoke from the Cole County Sheriff’s office, where debris including insulation, roofing shingles and metal pieces lay on the ground outside the front doors. Authorities discouraged people from beginning clean-up efforts until power is safely restored. Hospitals set up command centers if needed.

Austin Thomson, 25, was in the laundry room of his complex of two-story apartment buildings in Jefferson City and noticed the wind started picking up. He saw sheets of rain coming down and a flagpole bend and then slam to the ground. The windows broke and he dove behind the washers and dryers.

After it calmed down, he walked outside to check the damage, and retrieved a stuffed animal for his daughter from his damaged apartment.

The weather service said it had received 22 reports of tornadoes by late Wednesday; some could be duplicate reporting of the same twister.

One tornado skirted just a few miles north of Joplin, Missouri, on the eighth anniversary of a catastrophic tornado that killed 161 people in the city. The tornado caused some damage in the town of Carl Junction, about 4 miles (6.44 kilometers) north of the Joplin airport, where several injuries were reported.

The severe weather was expected to continue Thursday as the storms head east. Forecasters at the Storm Prediction Center say parts of the Ohio Valley and the Mid-Atlantic could see tornadoes, large hail and strong winds. Forecasters say the area most at risk for bad weather Thursday includes Baltimore and Pittsburgh.

Storms and torrential rains have ravaged the Midwest, from Texas through Oklahoma, Kansas, Nebraska, Iowa, Missouri and Illinois. Authorities urged residents of several small towns in Oklahoma and Kansas to leave their homes as rivers and streams rose.

Two barges broke loose and floated swiftly down the swollen Arkansas River in eastern Oklahoma, spreading alarm downstream as they threatened to hit a dam. A posting on the official Facebook page of Webbers Falls, Oklahoma, said the runaway barges posed a dire threat to the river town’s 600 residents: “Evacuate Webbers Falls immediately. The barges are loose and has the potential to hit the lock and dam 16. If the dam breaks, it will be catastrophic!! Leave now!!”

Authorities located the barges Thursday morning, stuck on rocks in the swollen river. The Oklahoma Highway Patrol says the barges were still tied together, and crews were working to secure them.

Still, the Interstate 40 bridge and a state highway bridge remain closed over the Arkansas River at Webbers Falls as a precaution, according to the Oklahoma Department of Transportation. Over Memorial Day weekend in 2002, a barge struck the Interstate 40 bridge pier at Webbers Falls, causing part of the bridge to collapse into the Arkansas River. Fourteen people died after their vehicles plunged into the water.

Deaths from this week’s storms include a 74-year-old woman found early Wednesday in Iowa. Officials there say she was killed by a possible tornado that damaged a farmstead in Adair County. Missouri authorities said heavy rain was a contributing factor in the deaths of two people in a traffic accident Tuesday near Springfield.

Missouri’s three tornado deaths bring to seven the number of deaths from storms this week. Officials in Oklahoma confirmed Wednesday that flooding was responsible for the death of a woman who drowned while driving around a barricade near Perkins, about 45 miles (72 kilometers) northeast of Oklahoma City.

You can take a look at the carnage below: 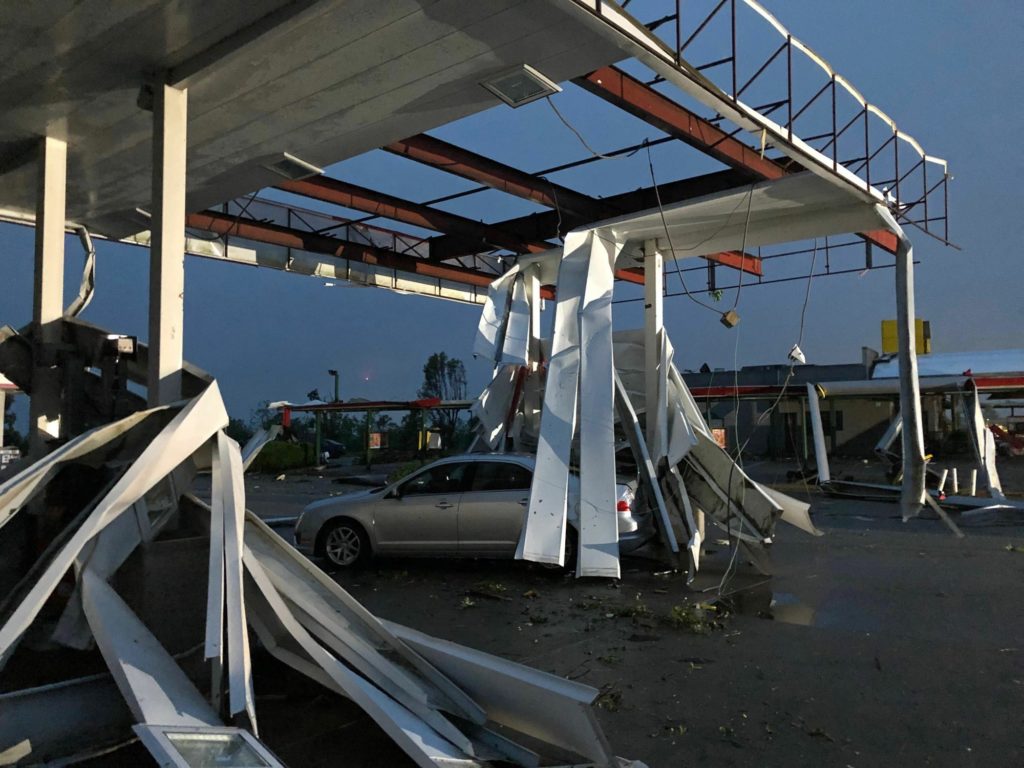 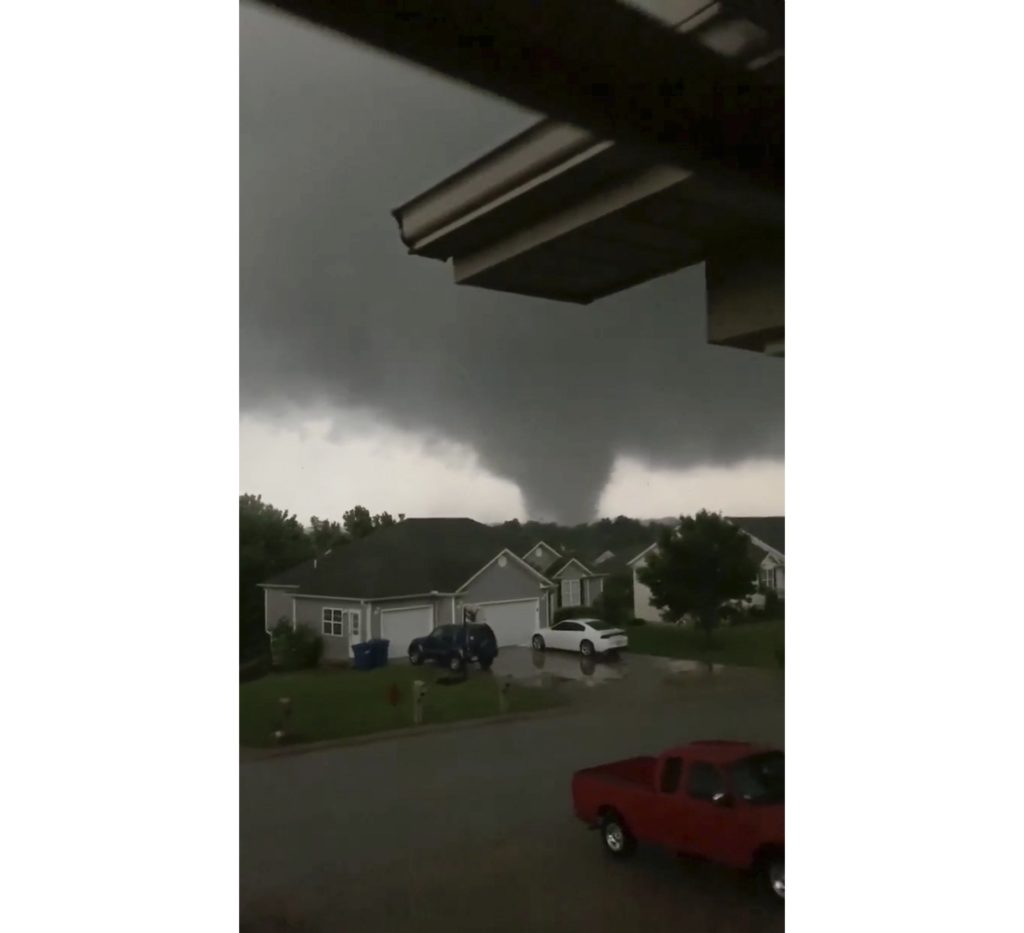 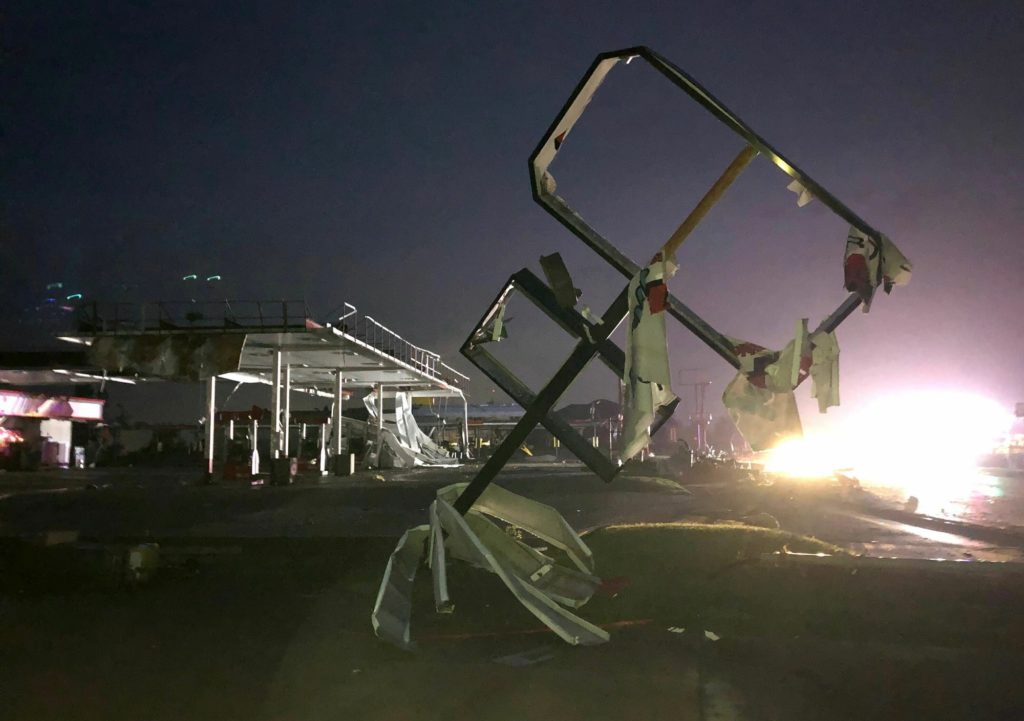 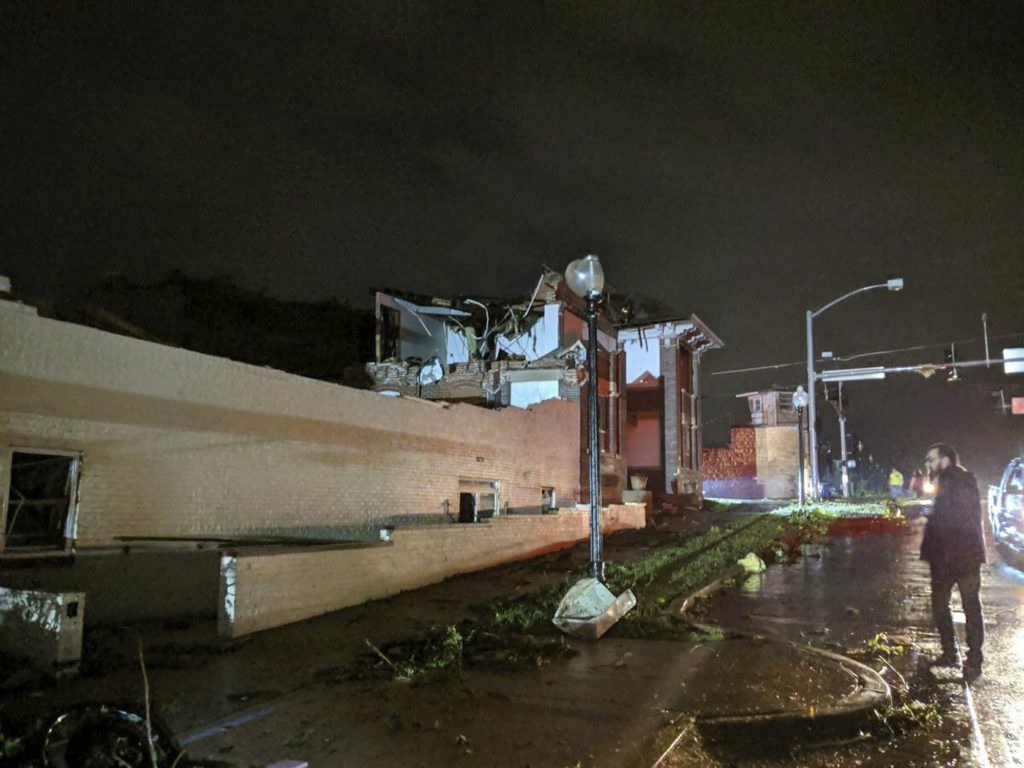 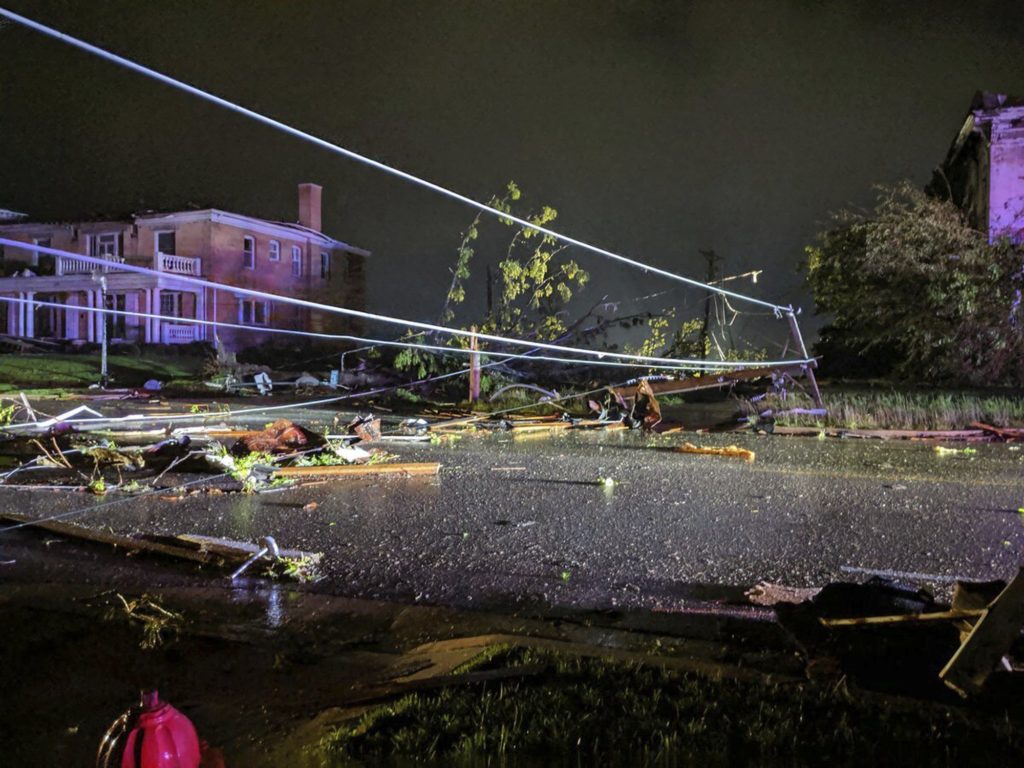