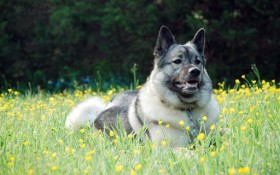 Of the eight finalists in the American Humane Association’s 2015 American Hero Dog contest, Harley is the oldest, smallest and most unlikely of winners.

After 10 years of abuse in a Midwestern puppy mill, Harley has a diseased heart, rotted mouth, fused spine, broken tail, gnarled toes, deformed legs and a missing eye. But the 6-pound Chihuahua was named top dog at a sold-out Los Angeles awards ceremony. More than a million public votes were cast and an expert panel weighed in on Harley’s honor. The show will be broadcast nationally on the Hallmark Channel on Oct. 30.

Here’s a look at all eight dogs, including two military service dogs, three German shepherds and four rescues, that competed for America’s most heroic canine.

First is American Hero Dog winner Harley, 14, owned by Rudi Taylor of Bethoud, Colorado. Together they’ve raised a half-million dollars through “Harley to the Rescue” to care for over 500 puppy mill dogs. Harley and Taylor have spread their message against commercial breeders to thousands of people.

“Harley is a hero mostly because he gives hope to hundreds of thousands of dogs still living in puppy mills. He inspires so many people. It could be his imperfect look that lets people relate to him. I think he touches their hearts.” — Taylor.

Dax, an 8-year-old German shepherd, works with his owner Chris Alberini on the K-9 team for the Ashland Police Department.

In 2013, Alberini believes Dax saved his life and the lives of fellow officers as they chased a gunman. “I wouldn’t be standing here talking today if it weren’t for him.” — Alberini.

Glory, a 3-year-old yellow Labrador, is a K-9 dog owned by Keith Lynn. Both work for the Beloit Fire Department in Wisconsin. Glory is trained to detect ignitable liquid but also identifies firefighters who are having a bad day and spends time with them.

“My dog’s a hero because she touches people, she’s very calm and docile, just a ham. She loves everybody.” — Lynn.

“He saved my life, he saved my family. My wife said I had one more shot and if it didn’t work, she was going to take the kids and leave. He helped with panic attacks, flashbacks and nightmares.” — Haag.

Hudson, a 3-year-old blue nose pit bull, was found when he was 3 weeks old nailed by his paws to railroad tracks in Albany, New York. One paw had been cut off. He was adopted by Richard Nash and his family, in Castleton, New York, and trained as a therapy dog to visit schools, hospitals, adult day care and hospice centers.

“Hudson is a hero for the joy he brings to others. He has taught us to overcome and persevere. He taught us the value of human nature and love and kindness, no matter what problems we have in life.” — Nash.

Sgt. Rambo is 7, a German shepherd medically retired from the Marine Corps after serving as an explosives detection dog at the Marine base in Cherry Point, North Carolina. He was never deployed but had a front leg amputated. Lisa Phillips adopted him in 2012 and he became Alamo Honor Flight’s mascot, accompanying World War II veterans to Washington, D.C., and serving as ambassador for K-9 Members of the Armed Forces.

“He’s really able to shine the light on our vets, both two- and four-legged. You can see the devotion these dogs give. They are drafted in every sense of the term. All they do is work for human troops for love and affection.” — Phillips.

Chara is an 8-year-old Norwegian alfhound who lives with handler Kristina Church-DiCiccio in Waynesboro, Virginia. In 2008, Church-DiCiccio developed a neurological condition. She and Chara worked out a way for her to recognize attacks. Two weeks after Church-DiCiccio’s son was born, Chara used her alerting skill to let her know her boy had stopped breathing.

“I literally put my life in my dog’s hands. She’s gone beyond her training as a service signal dog. She’s come up with a miraculous sixth sense to help me out and she saved my son’s life. She is my heart and soul.” — Church-DiCiccio.

“Glory helps bring closure for so many people with a lost pet.” — Coldiron.