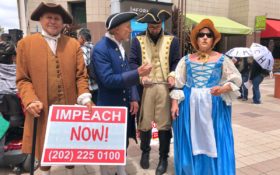 Activists and organizers from the liberal activist group MoveOn.org tried to hold a nationwide rally to impeach President Donald Trump on Saturday. They planned 120 events to take place.

No one showed up.

By the time the sun had set on Saturday, the whole thing proved to be a total dud.

The deafening silence was further proof that Democrats are out of touch with real Americans.

“Donald Trump’s abuses of our communities and country demand action from Congress, which has the responsibility and authority to hold Trump accountable. The next crucial step is an inquiry into whether to draft articles of impeachment,” MoveOn.org claims on their website, Impeach.org.

But apparently people in Detroit, Michigan missed the message.

Nice turnout at the #ImpeachTrump rally in Detroit this afternoon. Soon to be joined by @RashidaTlaib! pic.twitter.com/m4loqRUVat

The scene was even more dismal in Torrance, California, where less than a dozen people showed up —

Even Portland, a far-left hotbed, failed to attract more people than a Cracker Barrel restaurant on a Sunday morning.

The so-called resistance to Trump has been slow bleed for liberals.

And the show may be finally coming to the end — save for a few sore losers.

According to a recent Fox News poll, most Americans simply aren’t convinced that impeachment is going to happen. 56 percent of voters say there’s no chance Congress acts.

The laughable attendance, small as it was, caught the attention of Trump. The president took to social media to ridicule the liberals wasting their time.

…..saying enough. Democrat voters want to hear the politicians talking about issues. This is a huge distraction and will only help Donald Trump get elected.” @JedediahBila “Greatest President since Ronald Reagan” said a counter-protester. LehighValleyLive