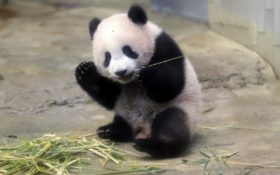 Xiang Xiang, which means fragrance in Chinese, was born in June at Tokyo’s Ueno Zoo to its resident panda. The zoo and its neighborhood have celebrated the female panda’s healthy growth, especially after the death of a days-old baby five years ago.

“Kawaii (cute)!” screamed many visitors, their voices filling the panda house during the 2 ½ hour viewing session, as Xiang Xiang crawled on the ground, followed its mother Shin Shin, climbed a tree and played with bamboo branches. The visitors held up smartphones trying to capture every antic of the slow-moving baby panda during their less than 10 minutes of viewing time.

Many visitors decorated themselves or their children with panda motifs on hats, scarves and even shoes and jackets, or wore black-and-white jackets. In and outside the zoo, panda goods of all kinds were on sale, including stuffed panda dolls, cookies, sweet buns and bread. Some shopkeepers wore panda costumes.

Only 2,000 people were allowed into the panda house, with tickets distributed through a lottery. Zoo officials said Xiang Xiang’s public appearances will be limited for the time being to minimize the stress.