[Pic] Can someone show Nancy Pelosi this photo... ? - The Horn News 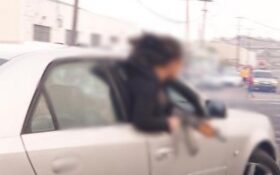 Robberies in broad daylight, rampant homelessness, reckless shoplifting: This is life in many of America’s most liberal cities.

The Horn News has often reported on how dangerous many Democrat-run cities in America have become.

And one bombshell photo from the most notorious of them all — San Francisco — is all you need to know.

What it shows is jaw-dropping.

The San Francisco Police Department revealed an image of an unidentified woman holding an AK-47 assault rifle while hanging out of the window of a Cadillac at an illegal street race.

Police say the photo obtained was taken during an “illegal exhibition of speed.”

On 7/11/2021, During an illegal exhibition of speed event at Barneveld & McKinnon, a passenger leaned out of a Cadi holding an AK47; see photo. SFPD Traffic Company personnel worked up a case, and seized this particular vehicle today. @SFPD @sfmta_muni @SFPDPerea pic.twitter.com/4disQpzziY

The bizarre photo is yet another example of how lawless House Speaker Nancy Pelosi’s city has become.

Fox News has reported that the fatal and non-fatal shooting total reached 119 across the first six months of 2021 — a nearly 100 percent increase compared to last year’s total.

Although some crimes are down in San Francisco, gun violence and homicides, in particular, are on the rise according to city officials.

Debate among critics is swirling as to whether or not the narratives of violence in cities like San Francisco have been exaggerated by media reports and other spectacular videos caught on camera. Most recently, a San Francisco-area Neiman Marcus luxury store was ransacked by a horde of thieves, and video showed them sprinting away with arms full of clothes.

What’s certain is that residents are concerned.

70 percent of those living in San Francisco say they feel as though the quality of life has declined, based on a recent June survey.

Considering this photo of a woman wielding an assault rifle out of a window — it’s not hard to imagine why.